Great installment! Start at the beginning and enjoy lots of entertainment from this series. 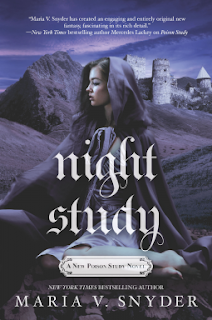 Genre: Fantasy, Paranormal
My Rating: Worth a 5.0 in my book!

New York Times bestselling author Maria V. Snyder transports readers back to the realms of Sitia and Ixia in an exciting new Study novel full of magic, danger and intrigue.

Ever since being kidnapped from the Illiais Jungle as a child, Yelena Zaltana's life has been fraught with peril. But the recent loss of her Soulfinding abilities has endangered her more than ever before. As she desperately searches for a way to reclaim her magic, her enemies are closing in, and neither Ixia nor Sitia is safe for her anymore. Especially since the growing discord between the two countries and the possibility of a war threatens everything Yelena holds dear.

Valek is determined to protect Yelena, but he's quickly running out of options. The Commander suspects that his loyalties are divided, and he's been keeping secrets from Valek…secrets that put him, Yelena and all their friends in terrible danger. As they uncover the various layers of the Commander's mysterious plans, they realize it's far more sinister than they could have ever imagined.


Review:
I remembered how Shadow Study ended and was anxious to read this story. I was pleased that all my favorite characters were present and there was plenty of action. Tensions are growing between Sitia, the home of Yelena’s magical training and friends, and Ixia, Valek’s homeland where Yelena is serving as a liaison between the territories. Unfortunately, the Commander has selected a new training security chief and is challenging Valek’s loyalty.

Yelena is vulnerable due to the loss of her magical abilities and other issues. She is in danger from a criminal, Owen Moon, who has been trapped and escaped several times. Janco, Ari and Leaf are included in the team to investigate how Owen Moon escaped, what his secret project is and where he might have gone. Moon has powerful magic and powerful friends. Valek and Yelena discover that Moon is working with and as a guest of the Commander which puts Yelena and Valek in extreme danger. The Commander challenges Valek's loyalty and sends him off to investigate thefts at a far edge of Ixia.

Yelena chooses to return to Sitia to try to convince the Counsel of the danger posed by Moon and his connection to the Commander. Leaf, with the help of his father, Esau, learns information that sends him back to Sitia with important discoveries about Moon’s project which threatens the safety of Sitia.  They find a new enemy upon their return and they won't find help from the magicians this time.

I loved the intrigue and usual antics involved in the team work of Yelena, Valek, Janco, Ari, Leaf and even Kiki, Yelena’s wonderful Sandseed horse. Fisk and his crew of street smart, child spies play an important role together with a few new characters who come as a surprise, especially to Valek. This story has lots of betrayal and action with some added emotions and charming romance.

I devoured this pretty quickly pursing the excitement. I was holding my breath at points of crisis as I rooted for the heroes. This isn't totally perfect but it is worth a 5.0 in my book. I recommend the whole series but do suggest a new reader start with the original Study trilogy before this set. It will be well worth the reading enjoyment.


I am very glad I received this through NetGalley for an honest review. This qualifies for my NetGalley Challenge, N for Alphabet Soup Challenge and TBR Triple Dog Dare.

On January 26, 2016 the day of NIGHT STUDY's US release, Maria V. Snyder is doing a LIVE online Ask Me Anything segment at 6:00 p.m. PST and you're invited! Here's the link: http://www.inkitt.com/ama/mariavsnyder
MVS says "Be kind! ;)"

For details on the tour and giveaway links go here.

Posted by Martha Eskuchen at 10:14 PM