Happy Friday.
I hope everyone had a great first week in "Sweet 2016".
We had a busy beginning to the new year, which is consistent with our business.
Our weather has been cold -- for us.  We are anticipating family visitors for Friday and Saturday.
We have a special prayer need in the extended family so I will appreciate prayers for safe, successful surgery this coming week.
I expect to spend the rest of today planning my reading and setting up Challenge posts for 2016 - fun stuff. :-)

Thank you to all who entered the January 1 Pick. There was only one automatic win again this week.  Automatic wins are those who requested the book four times without other people asking for that book during those weeks. There were no blocked titles.
AUTO:
Rubynreba gets It Had to Be You


CONGRATULATIONS
to Random.org picked Winners from January 1 Pick:
Marjorie gets a GC
Rita gets Into the Valley 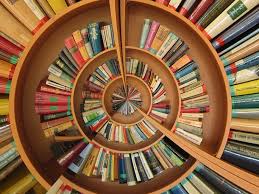 Do you ever feel that life is circular.
Image found at Bustle.

New Book Group #62 November 6, 2015
(I was getting ready to leave the office and realized I hadn't taken the photo of the books yet.
I took this very quickly. I may try to get another next week but this will have to do for now.)

I am happy to say that so far about 913+ books have found new homes! YAY. I have to update my print out to check the exact number sent out - a few were never claimed. I periodically update the lists - deleting those won. You can still go to the Friday Pick list link to see older posts and the older lists book pictures if you want!