There is action, adventure and danger in this medical mystery/suspense.
The Colossus
by Ranjini Iyer 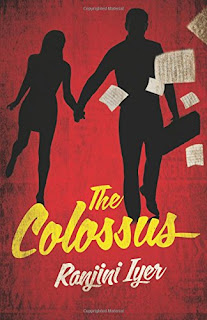 Maxine Rosen, a demure, clumsy, Chicago caterer gets more than she bargains for when she discovers her father’s coded research document linked to health pills unearthed from the ancient Indus Valley civilization. The pills, she learns, carry frightening secrets about the true nature of her father’s death; a truth that may be more than she can bear. Enlisting the help of handsome professor Julian McIntosh, Max travels across the continents to unlock the mystery of her father’s research, struggling to keep one step ahead of a powerful German pharmaceutical company who will stop at nothing to keep the disturbing document under wraps.


Review:
Maxine Rosen is a superb cook who struggles with her own weight. She hopes to make a success of the catering business she is building in Chicago. She was young when her mother died and hurt by her alcoholic father’s apparent suicide. Max is surprised when a scientist friend of her father arrives and implies that her father’s death may not have been suicide. Lars begins to explain a little about the research that her father had been working on and asks if Max can help decode the research papers. Lars and Max are threatened by a thug who takes papers he thinks are part of the research. Lars returns home to London leaving a trail of questions.

Max seeks help at a local University and meets handsome professor, Julian McIntosh. Julian is intrigued by the history involving an ancient civilization and begins to help Max gather information. Although Julian has been in a long time relationship, he is drawn to Max and finds her full figure attractive.

Max sets off to London trying to track down mysteries. Julian follows when she calls in a panic. The two set off following clues and trying to gather intel as they try to avoid the thug and a second enemy who is trying to capture any secrets they uncover.

The medical mystery plot-line includes engaging action, adventure and danger. Unfortunately, I didn’t care for Max’s squeamish, mostly wimpy, character. Her reactions were just this side of hysterical and nonsensical to me. Every once in a while she showed some sense and bravery, but usually I was struck by her weakness and stupidity. So – she didn’t work for me. Julian was an okay character although he delayed telling the truth of his status.

The writing moves fairly well with occasional spurts of strong description. The feel of the story is action adventure with a determined, if clumsy and wimpy, heroine. The medical issue is an interesting theory and the author adds notes at the end as supporting research. This book would be good for those who are interested by the mystery and adventure nature. There are many more positive reviews at Amazon so I suggest checking those and perhaps reading the “look inside” to get a feel for the book.


I received this for review last spring but it got lost in email. This is part of my TBR Triple Dog Dare.
Posted by Martha Eskuchen at 4:46 PM