Letter from Mimi Jean Pamfiloff with Excerpt and Giveaway

Votan, God of Death and War Gets a Makeover
by Mimi Jean Pamfiloff

That’s right. The God of Death and War is getting a sexy makeover. Why does he need one? Good question. He doesn’t! But what if you had the chance to waive a magic wand and make your dream man just a smidgeon dreamier, a tad more sizzling, and a hair more alpha-manlier?  Would you do it?  Why the hell not! That would be like saying no to those chocolate sprinkles on that sundae.

And hey, and let’s be honest, Votan was my first creation in the Accidentally Yours series. He’s original awesomeness—overbearing, hotter than an apple pie fresh from the oven, and nearly indestructible at seven feet. He’s super concentrated divine masculinity. But he did have one small handicap: me!

ACCIDENTALLY IN LOVE WITH…A GOD? was only the second novel I’d ever written (and my first if you count that the story is an adaptation of that initial stab at writing). Since its Indie debut in Jan. 2012, I’ve written several more, taking feedback from readers and writers along the way to improve. These final installments of the series (under Grand Central Publishing) had the added benefit of a fabulous editor, Latoya Smith. (Mimi! Get to the point!)

Point is, you’re never too old to change!  After about 100K e-copies sold, it was time for Votan (and Emma) to get a little professional makeover! (Insert applause for Latoya here.)

Yes, it’s still the same, quirky, crazy story, but I hope the readers will find Votan and Emma a little bit steamier. (I added an extra yummy scene!) Emma also got a tiny makeover (just as snarky as before, but less whiny). And Tommaso, well, he’s still the same sexy bad boy who confuses us.

I hope everyone enjoys that New & Improved, Mass Market paperback. My 1stever!!! (Insert image of Mimi disco dancing wildly next to Cimil here.)  For those who’ve got the ebook, I understand you’ll have the opportunity to also enjoy this revised edition. 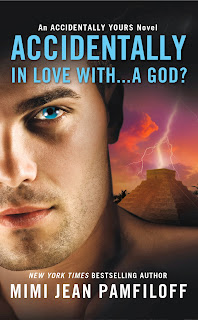 
With his golden face beaming, the man smiled as he stroked my sopping wet hair and cradled me against his warm, smooth chest. “I love this dream,” I said with a breathy voice, then stretched my arms above my head, gazing happily into the most striking set of luminescent, turquoise green eyes I’d ever seen.
To boot, they belonged to a breathtaking, masculine face, a face one would expect to see on the cover of a magazine named something like, I’m Way Too Hot To Be Your Man, or In Your Dreams, Honey.
Oh, yeah. Without a doubt, I’d topped myself this time. Sculpted cheekbones, thick dark lashes, chiseled jaw, and lips so full they had to be meant for kissing or eating something really juicy. He was way hotter than the specimen of perfection from my last dream, and bonus, he didn’t have that scary vibe. I reached up and ran my fingertip along the ridge of his hard-lined warrior nose.

“Emma, what in the name of the gods’ creation are you doing?” he scorned. “We really don’t have time for your immature little fantasies. We’re in the middle of a crisis. Do you not remember?”
I blinked and slowly moved my eyes from side to side.
Jungle? I was in the jungle. And my clothes were wet. Come to think of it, for a dream, I didn’t feel so hot. My lungs burned, my body felt like it’d been chewed up, and my head was throbbing. So aside from the perfect man with long, damp, wavy black hair holding me in his arms, none of this felt like a dream. It felt—
“Holy Mother!” I pushed myself away and rolled into the dirt, pointing in disbelief. “Wha—you—you—?”
“Ah…so eloquent as always, my sweet. It is astounding—you actually have a college degree, yet cannot find better words.” He pushed himself up off the ground.
As he rose, my heart stopped, started, and then went into overdrive. His legs and spine straightened into a towering mass of unforgiving muscles. With shoulders like a lumberjack and thick, powerful thighs, I didn’t know if I wanted to run away or climb him like a tree. He was utterly enormous. Jolly Green Giant enormous. Except, obviously, not green. More golden brown. He was a gorgeous, towering mass of golden brown perfection.
No. Definitely not a cave-dwelling, wart-infested troll. Great. Just great. Now I knew I wasn’t crazy—Guy was definitely real—but now I also knew I was in way over my head. He was gorgeous.
I stood in awe, my mouth gaping as my eyes attempted to register every rope of muscle, every capacious curve packed with power. Christ, he had to be at least seven feet tall.
“Six nine, actually,” he said, guessing my thoughts.
“This can’t be possible,” I whispered, my eyes continuing to dart up and down the length of his body, stopping right on dark trail of hair that started just below his navel and continued down, down, down to his enormous beast of a—“Oh! You’re naked.” I turned sharply, but only to stop myself from reaching out to touch it. No man could be that…that…endowed. Wow. “This can’t be happening.” I covered my face.
“Emma,” he moved behind me, placing his powerful hands on my shoulders. A jolt shivered its way through my body.
I was wrong about the vibe. Way wrong. This man, or whatever he was, radiated hazard. He should come equipped with a set of blinking lights or flares. He was—“Bad. Very, very, bad,” I mumbled, pinching the bridge of my nose.
And pathetically, after everything that had happened, all I could think about was this naked, hard-bodied, glorious “man” who’d just permanently seared his image inside the storage compartments of my female DNA. All men, from this day forward, would have to survive a mental side-by-side comparison against him. They’d all lose.
Then a part of my brain, which was now marinating in a pool of whatever hormonal overload he’d triggered, was trying to tell me something important. It wasn’t ready to capitulate and hand over the keys to the Emma kingdom.
Ah…there it is. “Don’t touch me!” I swiveled sharply, pushing his hands from my body, pointing one angry finger in his face. “I asked you for one simple thing! One!”
The corners of his delicious lips curled as he arrogantly flipped his dark, wet hair over his bronzed shoulder. “Exactly. You asked.” He took one bold step forward, well within my personal-space bubble. Clearly, he was trying to intimidate me with his endless ripples and naked body. How sad. It was totally working, which made me even madder.
He bent down to meet my glare, his nose inches from mine. “But I didn’t agree. Did I? In fact, my exact words were, ‘I. Will. Not. Promise.’ Sharp emphasis given on the not, little girl.”
He so had this coming. I lifted my knee, thrusting squarely in his groin. The almost-seven-foot brawny male fell to his knees cupping himself.
“I am not a little girl. Emphasis on the not…


ENTER THIS GIVEAWAY for TWO COPIES from Hachette:
PEN WORLDWIDE: Print for US or digital for Canada or International