This is another fun listen with more romantic conflict and paranormal danger.
Second Grave on the Left: Charley Davidson, Book 2 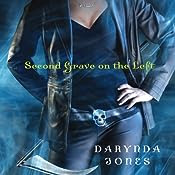 When Charley is rudely awakened in the middle of the night by her best friend who tells her to get dressed quickly and tosses clothes out of the closet at her, she can’t help but wonder what Cookie’s up to. Leather scrunch boots with a floral miniskirt? Together? Seriously?
Cookie explains that a friend of hers named Mimi disappeared five days earlier and that she just got a text from her setting up a meet at a coffee shop downtown. They show up at the coffee shop, but no Mimi. But Charley finds a message on the bathroom wall. Mimi left a clue, a woman’s name. Mimi’s husband explains that his wife had been acting strange since she found out an old friend of hers from high school had been found murdered a couple weeks prior. The same woman Mimi had named in her message.

Meanwhile, Reyes Alexander Farrow (otherwise known as the Son of Satan. Yes. Literally) has left his corporeal body and is haunting Charley. He’s left his body because he’s being tortured by demons who want to lure Charley closer. But Reyes can’t let that happen. Because if the demons get to Charley, they’ll have a portal to heaven. And if they have a portal to heaven… well, let’s just say it wouldn’t be pretty. Can Charley handle hot nights with Reyes and even hotter days tracking down a missing woman? Will Cookie ever get a true fashion sense? And is there enough coffee and chocolate in the world to fuel them as they do?

Here is your signpost for the most hilarious listen of the summer: Second Grave on the Left.
©2011 Darynda Jones (P)2011 Macmillan Audio


Review:
Charley is once again addressing two mysteries in this second book.  One mystery involves the disappearance of one of Cookie’s good friends, Mimi. It appears that Mimi was acting strangely before disappearing and now the investigation reveals that many of her high school friends have recently died. Charley and Cookie are in a desperate race to find Mimi before she turns up dead too.

However, Charley is also caught up in trying to save her dream lover, Reyes, aka the Son of Satan. We learn much more about Reyes, his history and connections to Charley. All of her life Reyes has secretly been protecting her through an astral connection. But now he is in danger of leading demons to find Charley which would be a very bad thing, allowing them to use her as a portal to heaven. Charley found Reyes in prison, actually in a hospital in a coma, but now he has escaped and gone into hiding. Charley is intent on finding Reyes before he allows his corporeal body to die while he continues to hide from her in an effort to keep her safe.

The conflict between Charley and Reyes creates great tension. Also, Charley is learning that she has more powers than even she realizes and she is beginning to let her family in on some of her secrets with some heartbreaking and encouraging moments. If you enjoy sass, humor and romantic conflict I highly recommend this series.

Audio Notes: Again, Ms. King does a great job of narrating and making the characters come more alive than a print book might. This listen moved quickly and I am ready to purchase book three from Audible!


This download was from my Audible Library.
Posted by Martha Eskuchen at 6:57 PM