This has all the elements I love in a romantic suspense: lots of action and suspense with good romantic tension.
No Escape (Texas Rangers)
Mary Burton 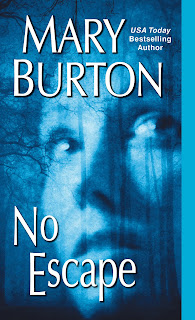 Book Description
Publication Date: October 29, 2013
He Was Taught How To Kill
Even behind bars, serial killer Harvey Day Smith exudes menace. Psychologist Jolene Granger has agreed to hear his dying confession, vowing not to let the monster inside her head. And Harvey has secrets to share—about bodies that were never found, and about the apprentice who is continuing his grisly work…

And Now He’ll Teach Them
He buries his victims alive the way his mentor Harvey did, relishing their final screams as the earth rains down. And as one last gift to the only father he knew, he’ll make the most perfect kill of all.

How To Die
Everything about this investigation is unnerving Jo, from Harvey’s fascination with her to the fact that she’s working alongside Texas Ranger Brody Winchester, her ex-husband. Harvey’s protégé is growing bolder and more vicious every day. And soon the trail of shallow graves will lead them to the last place Jo expected, and to the most terrifying truth of all…


Review:
Dr. Jolene Granger is a strong minded young woman whose determination and drive for knowledge pushed her through to become a psychologist. Now Jo delves into criminal minds helping local police and even the Texas Rangers. Now Texas Ranger Brody Winchester has contacted her to take her to interview a serial killer, Harvey Smith, who is dying from cancer. Smith was captured by Brody and has confessed to some of his kills but has refused to give up the location of some of the girls.

Smith is known for burying his victims alive and he likes to play mind games. He has called Jo for a purpose. He is willing to tell her a new location of bodies but there is something else he will only hint at. And he knows the secret between Jo and Brody that few others know...they were married fourteen years before.

Brody goes into protective mode when it comes to Jo. She is cautious about all men, but especially about Brody. After all, they had a whirlwind romance but Brody was young and hot tempered. He joined the Marines in order to earn money to support them but in so doing he abandoned Jo when she needed him most.

Brody wants a chance to show Jo he is not the immature young man she knew before. But right now they are hunting a new killer – Robbie, the protégé that Smith has just revealed. A young woman in Jo’s community has gone missing and it seems that another psychopathic killer is stalking Jo. Brody might have a chance with Jo but only if he can keep her safe and away from the killing ‘son’ of a madman.

Ms. Burton does an excellent job of building suspense into this twisted plot. There are several men around Jo whom the reader can suspect might be dangerous, some more obvious than others. Paths and clues cross to keep the reader guessing. Meanwhile there is the underlying tension of the conflict of unresolved issues, and passion, between Jo and Brody. The writing is sharp, full of action and momentum that made me want to keep reading all night. I am very glad to have found this author to add to my ‘go-to’ list for wonderful romantic suspense. This is definitely a must read for those who enjoy good romantic suspense.


I received this from Joan Schulhafer Publishing & Media Consulting for an honest review, with author Interview and Giveaway - see next post!
Posted by Martha Eskuchen at 5:30 AM