This has an interesting premise but the story is too simplistic and the narration is lackluster.
Helper12 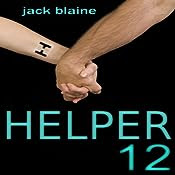 Publisher's Summary
Helper12 works as a Baby Helper in Pre Ward, the place where babies spend their first six months of life before they're tracked for vocations and sent to training. She does her job well, and she stays out of trouble. But one day, the Sloanes, Society members who enjoy all the privileges of their station - family unit clearance, a private dwelling, access to good food and good schools - come to "adopt" one of the Pre Ward babies. The Director makes a deal and the Sloanes walk out with a brand new child.

They also walk out owning Helper12 - the Director sells her to them, and there's nothing she can do but go. At the Sloanes, Helper12 enters a world where people should be able to enjoy life - with high position and riches come the opportunity for individual freedom, even the chance to love - but that's not what she finds. The Sloanes are keeping secrets. So is their biological son, Thomas.

Helper12 has some secrets of her own; she's drawing, which is a violation, since Baby Helpers aren't tracked for Art. And she's growing to love the child she was bought to care for - at the same time that Ms. Sloane is becoming disenchanted with her impulse baby buy.

When all your choices are made for you, how do you make some for yourself? Helper12 is about to find out.
©2011 Jack Blaine (P)2013 Jack Blaine


Review:
Helper 12 is a worker in a society that directs the roles of it’s citizens. Children are tested for their aptitude and then trained and tracked for the job they are assigned. Helper 12 is designated, and branded, to help care for babies. Oddly her branding was changed which is unusual. Once it had been a B which would have made her a Breeder. But the B was modified to become an H. Helper 12 is accustomed to working her shift and returning home to her small apartment. She tries, not very successfully, to remain detached from the babies because they will be released to chosen parents or she may be required to release them from life if there is anything unsuitable.

One day she is caring for an infant she calls “Jobee” when strangers barge into the nursery with her boss. The excited, demanding woman is frantic for a child while her husband and a teenage son stand back and watch. The director sells the child to the Sloanes and he also sells Helper 12 to them to care for the child. Helper 12 dare not raise a fuss or she will most likely lose her job and “disappear.” Besides, she would just as soon continue to watch over the growing infant who will have a better level of life with the wealthy family.

It is quickly clear that the mother, Mrs. Sloane, really doesn’t have the patience or inclination to care for the boy.  Helper 12 grows more protective and is surprised and wary when the biological son of the household, Thomas, takes a personal interest in her and the child. As Helper 12 learns more secrets she becomes more concerned for the safety of Jobee and herself. But she has limited choices until Thomas suggests a daring move.

This is an interesting concept but I felt the characters were a little weak. Added to this the plot itself was lacking because the solution or escape came too easily. There could have been a better build of tension and action to increase the excitement for the story. The writing is okay, there were some interesting comments on society and it is a shorter work so a quick read or listen. Unfortunately, what started as a good story idea fell short in the delivery.

Audio Notes: I'm sad to say that the very lackluster narration did nothing to help the story. This was much more of a reading than a narration. There was very little emotion or nuance added. If the thought was to try to reflect Helper 12 as a limited character it may have succeeded for that but the narration failed to enhance the overall story presentation.


I received this download from Jack Blaine Books through AudioBook Jukebox.
Posted by Martha Eskuchen at 5:30 AM