Book Review and ARC Giveaway: The Christmas He Loved Her by Juliana Stone

This is an emotionally charged read where the characters have to overcome pain and guilt to find romance. 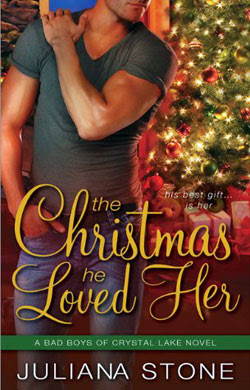 Genre: Contemporary Romance
My Rating 4.0 of 5.0

Book Description
Publication Date: September 24, 2013
"Will appeal to readers of Cathie Linz and Susan Elizabeth Phillips."—Booklist
All he wants this Christmas is her...

In the small town of Crystal Lake, Christmas is a time for sledding, hot chocolate, and cozying up to the fire with those you love. For Jake Edwards, it's also time to come home and face the music. He thought there would never be anything harder than losing his brother. Turns out there is: falling in love with his brother's widow, Raine.

Ever since they were little, Jesse was the Edwards brother who was always there for her, and Jake was the one who knew just how to push her buttons. Raine can't imagine a life without them, which is why it was doubly decimating when Jake left town after his brother's sudden death. Now he's back and she doesn't know whether to be mad or thrilled. Maybe both. Or maybe it will be the perfect chance for both of them to finally find happiness again.


Review:
Raine is a young woman who has curled into grief after the death of her husband, Jesse. But there is more pain that she is carrying that isn’t revealed fully until late in the book. Raine grew up as a tag- along following neighbor twins, Jesse and Jake Edwards. Jesse was the serious twin although he also was a risk taker and mischievous. Jake has always been the more vibrant twin but he and Raine seemed to be combative, always going head to head in argument and discussions.

Jake came back alive from the middle east combat and is shrugging with his own guilt. He wasn’t able to save his brother who seemed to have thrust himself into danger. When Jake returned he realized that he still, as always, wanted what he couldn’t have – his brother’s woman, Raine. Jake panicked a year before when he took off after being with Raine briefly.

It is clear that Raine and Jake have deep feelings for each other. It is also apparent that they need to work through a lot of pain, grief, misunderstandings and even secrets before they might have a chance to come together for a future.

There are additional supporting characters that add to the emotional trauma. Jake’s parents are also coping with the grief and loss and on top of that his father has been ill for the past year. Raine’s mother, who spent most of Raine's youth ministering to starving children overseas, is back and asking for a chance to be a mother. Jake has come home with a friend, Lily, who is fashion-model beautiful but also emotionally damaged. These people add different conflicts and stresses to Raine and Jake’s already strained relationship.

Although I was leery of the emotions as I started the book, I did become engaged and enjoyed the story. I wanted Jake and Raine to move along quicker to a point where they could accept their love and help heal each other. Of course, a big part of the story is their struggle to get to that point. There were a couple of gaps that bothered me, some more minor than others. Lily’s trauma was never explained although I suspect that is for another book. But the big gap was with Jesse’s mind set. There were hints that things weren’t right between him and Raine and there was a disclosure that he might have had a death wish but the reason was never discussed or revealed.

The romance is strong when they come together and there are a couple of intense scenes. These were nicely handled so they were not offensive and could be skimmed if the reader chooses. I felt that there could have been more depth in the characters. It was as if I was exposed to the top surface of pain and confusion and that dominated throughout. Still, the writing was strong and the momentum helped me ultimately enjoyed the book.


I received this book from Sourcebooks for an honest review.

ENTER THIS GIVEAWAY for the ARC Copy:

ENTRY FORM HERE
Don't forget to fill in the form for entry!
I have noticed a few commenters who forgot to enter through the Form.
For 3 Extra Bonus entries Visit the author's website and tell me something you find of interest.

* This contest is open to US or Canadian addresses.
* This contest will close 10 PM (Central) on October 25, 2013.
The winner will be randomly selected from all entries.
WINNER WILL BE ANNOUNCED after October 25, 2013.
Winners will have 72 hours to respond by email or the winners form linked in the announcement.
Posted by Martha Eskuchen at 1:00 PM