This is sassy and full of action and sensual relationship. Great, fun listening! 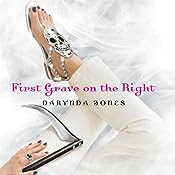 Publisher's Summary
A smashing, award-winning debut novel that introduces Charley Davidson: part-time private investigator and full-time Grim Reaper Charley sees dead people. That’s right, she sees dead people. And it’s her job to convince them to “go into the light”. But when these very dead people have died under less than ideal circumstances (i.e. murder), sometimes they want Charley to bring the bad guys to justice.
Complicating matters are the intensely hot dreams she’s been having about an Entity who has been following her all her life... and it turns out he might not be dead after all. In fact, he might be something else entirely.
This is a thrilling debut novel from an exciting newcomer to the world of paranormal romantic suspense. The audio includes a sneak peak of Second Grave on the Left.
Keep chilled: spend some more time with Charley Davidson.
©2010 Darynda Jones (P)2010 Macmillan Audio


Review:
Charley Davidson has known for a long time that she was different from most folks. As a child she didn’t understand but over the years she learned to hide her abilities -- she sees dead people. Not only does she see them but she apparently is THE Grim Reaper and she helps people pass through into "the light." Sometimes the dead want Charley to help them with unresolved issues before they will move along. That is how she became invovled in fighting the bad guys and solving murders.

Charley has worked as a Private Investigator helping the Albuquerque police, first her father, who has retired, and now Uncle Bob. No one, not even her family, really know the extent of her secrets. They just know that somehow she gets the right clues to solve the cases. Additionally, they have observed that, although sometimes clumsy, Charley always seems to manage to “dodge the bullet” so to speak. Actually, when she has been really in danger the bad guys seem to end up with very severe injuries, like broken spinal columns.

Charley struggles with being ‘a freak’ especially as she is scorned by her step mother and seems to have lost the friendship of her beautiful, talented sister. And of course having a normal dating life is pretty much out of the question. Lately though Charley has had a great night life- even if it is just in her dreams. She doesn’t know who her secret, sexy dream lover is, or quite ‘what’ he is and that begins to concern her when he starts appearing during her working hours too.

This first book of the series introduces Charley, her family, her work nemesis, Garrett, her assistant/best friend/neighbor, Cookie, and several other secondary characters. The reader also begins to experience Charley’s rather crazy world and life. It seems each of the books has Charley involved in helping a couple of cases. In this story she has arranged an escape for an abused wife and she is pulled in to help solve a killing of three local attorneys, who are conveniently providing her mixed messages.

There is great action, mystery, tension and humor in these stories! I love Charley’s sass and determination. Initially it isn’t clear if her dream lover, Reyes, is a good guy or not, but it is clear he has a protective streak and strong attraction for Charley. I also enjoyed Charley’s struggles as she slowly begins to reveal more of herself to her circle of family and friends. The plot is full and fast paced and I was eager to get and listen to the second book in the series.

Audio Notes: Lorelei King does a wonderful job carrying the craziness of Charley’s life and her somewhat vulnerable but irrepressible personality. Ms. King does a good job with the other characters and portraying the emotions as the story moves along. The narration definitely added to my enjoyment of this title.


I read this from my own Audible library.
Posted by Martha Eskuchen at 6:40 PM