This has great, strong characters and wonderful relationship tension.
My Lady Quicksilver
by Bec McMaster 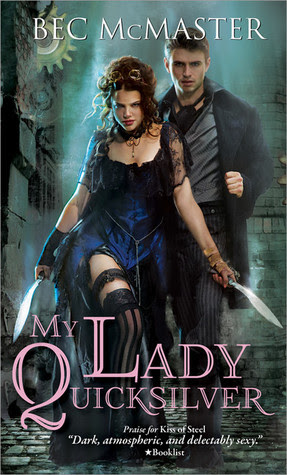 Book Description
Publication Date: October 1, 2013
"Deftly blends elements of Steampunk and vampire romance with brilliantly successful results...darkly atmospheric and delectably sexy."—Booklist Starred Review for Kiss of Steel
In the mist-shrouded streets of a steam-fueled London, a clockwork army is on the rise, vampire blue bloods rule the streets, and war is brewing...
I Will Come For You...
He will find her no matter what. As a blue-blooded captain of the Nighthawk Guard, his senses are keener than most. Some think he's indestructible. But once he finds the elusive Mercury, what will he do with her?

It's his duty to turn her in—she's a notorious spy and traitor. But after one stolen moment, he can't forget the feel of her in his arms, the taste of her, or the sharp sting of betrayal as she slipped off into the night. Little does Mercury know, no one hunts better than the Nighthawk. And his greatest revenge will be to leave her begging for his touch...


Review:
Mercury is a leader of the humanist rebellion against the powerful, blood sucking Echelon. She was raised to be a spy and an assassin. When her brutal, blue-blood, father slaughtered her beloved husband in front of her she managed to escape his clutches, along with her brothers. Her older brother, Jack, is frail due to the experiments and tortures of their father. Her younger brother, Jeremy, had gotten into the wrong crowd of machinists and has been missing since Mercury foiled the machinists plan to bomb the Echelon leadership.

Mercury has her own mechanical arm that was cut off trying to free her husband. The arm was then replaced by expert biotechs engaged by her father. Although Mercury sympathizes with the machinists, she did not agree they were ready for the all out war that would follow a vicious attack against the Echelon. Still she continues with her plans to face the brutal Coldrush guards of the Echelon. But her activities are being investigated by Lynch, “The Nighthawk” himself, who is the head of the Nighthawks, the rogue, outcast blue-bloods who serve as spies and enforcers for the Echelon along with the guard.

Mercury is distracted from her own revenge efforts while seeking news of the whereabouts of Jeremy. Mercury goes undercover as Rosalind, an able and determined secretarial assistant.  She convinces Lynch to engage her and they begin a careful, but oh-so dangerous, dance. The more Rosalind gets to know Lynch the more she respects him, even knowing he is the enemy. She knows she shouldn’t grow close but this is the first time her senses have been stirred–even her heart– since her husband’s death.
Lynch feels a growing attraction for Rosalind but he is confused by his lustful reaction to the seductive play of Mercury. He is having a hard time keeping his usual cold, controlled demeanor while challenged by two attractive, but both unattainable, women.

Lynch is given an ultimatum by the Prince Consort: he has two weeks to bring in Mercury for execution or submit himself in her place. But how can he turn over a woman who makes him feel alive?

There is plenty of action in addition to the deceptive intrigue as Lynch and his team, with Rosalind in tow to take notes, investigate the sudden rampaging and killing of loved ones and households among several Echelon leaders.  The reader knows that Rosalind is going toeventually get caught and exposed as Mercury. The fun is getting there and learning how Lynch reacts!

I enjoy the steampunk elements in this series and the strong characters. I really loved the intrigue and sensual play throughout this book. It kept my attention riveted waiting to see the next step or play in the game.

Although I recommend this whole series I think this could be read as a stand alone and it is my favorite so far. I read two of the prior books and missed one. I think the background was sufficiently recounted to identify the players and how they got where they are. There are still characters who have stories waiting, and I am especially interested to learn what happens to Barrons and to the ongoing battle between humanists and the Echelon.


I received the ARC from Sourcebooks for an honest reviewing.
ENTER THIS GIVEAWAY for the ARC Copy:


ENTRY FORM HERE
Don't forget to fill in the form for entry!
I have noticed a few commenters who forgot to enter through the Form.
For 3 Extra Bonus entries Visit the author's website and tell me something you find of interest.

* This contest is open to those with US address only.
* This contest will close 10 PM (Central) on October 18, 2013.
The winner will be randomly selected from all entries.
WINNER WILL BE ANNOUNCED after October 18, 2013.
Winners will have 72 hours to respond by email or the winners form linked in the announcement.
Posted by Martha Eskuchen at 7:35 PM