This is a bizarre but entertaining, quick listen.
Free: Whodunnit? Murder on Mystery Island 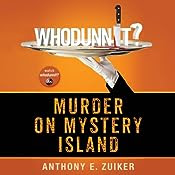 Publisher's Summary
Ten excited co-workers arrive at the beautiful Avondale Resort on a remote island in the middle of the Caribbean, having been told that they are being rewarded for their hard work and productivity. But their relaxing tropical getaway soon turns into a murderous nightmare.

After an extravagant first night dinner, the guests retire to their lavish suites only to be awakened by an ear-splitting bang. They rush to the smoking parlor to find Jordan, the company’s intern, dead - a massive hole in his chest. Giles, the consummate English butler who seems to be in charge, announces that they must solve the crime or be the next victim.

The killer, who has booby-trapped the island and cut off phone and Internet connections, is hiding among them. Is it the HR representative with a penchant for Bloody Marys, the twenty-two-year-old claims processor with the purity ring, or perhaps the head chef of the company cafeteria? The killer plays with their minds, inviting them to explore the beautiful resort, from the infinity pool with the high dive to the white sand beach complete with jet skis and snorkel gear.

Anthony E. Zuiker is the creator and executive producer of the CSI franchise, which includes CSI: Crime Scene Investigation, CSI: Miami, and CSI: NY. His mystery reality show, Whodunnit?, is his first foray into unscripted television. He lives in Los Angeles with his three children and his wife, Michelle.


Review:
This is a quick mystery. A little gruesome but interesting. Giles prides himself on being a proper butler. The only problem is that he has been cursed to participate in a game of murder at his last two posts. Now he has taken a new post at a mansion type estate on a remote island in hopes that the curse will not follow him. No such luck. Not long after he settles in he receives the first notice advising him that the company group of eleven that is arriving to celebrate in private is to participate in a murder game. Giles knows the rules and has little choice but to explain them to the staff and then the guests when they arrive. The first rule is – there is no escape. If anyone tries to leave the island they will die.

The other rules involve solving clues together in small groups and sometimes alone. Although the guests might work together, ultimately at the end of the game there will only be one winner, which means there will be two alive besides the staff: the winner and the killer. Giles is unhappily resigned to his role playing the host as he delivers the clues and riddles that the guest must solve and oversees their compliance.

I enjoyed the different characters with their quirks and idiosyncracies. Some were likeable and some not so much. It was fun to try to guess the clues and to see how the teams paired up, then failed or succeeded in obtaining and sharing information. I have to admit that I didn’t quite understand how the curse worked to connect the murders at the different establishments. I have to wonder if listening to the first book or watching the TV series would have helped any.

This is certainly a bizarre murder mystery that reminded me a little of Clue or And Then There Were None aka Ten Little Indians. It is a reasonably fun and entertaining listen...and, after all, the price was right!

Audio Notes: I enjoyed the narration by Gildart Jackson who portrays Giles as a wonderful polished, upright, butler persona. Mr. Jackson’s narration also helped to visualize the personalities with their different accents, upbringings and affectations. I am sure I enjoyed this more as an audio book then if I had tried to read it.


I received this title free from Audible.
Posted by Martha Eskuchen at 10:30 AM