I find Harlequin romances to be reliably easy and engaging reading.  I’m happy to say that this one fits the rule. 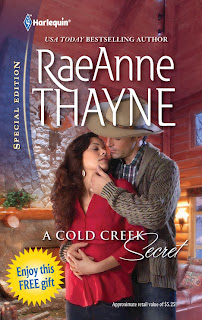 Book Description
Series: Cherish | Publication Date: February 2011
Just back from a tour of duty, all Major Brant Western wanted was a hot meal and a warm bed. What he didn't need was the stunning socialite in disguise who'd just shown up at his family's Cold Creek ranch. Scandal trailed bad girl Mimi Van Hoyt--aka "Maura"--everywhere she went. But once Brant discovered her secret, how could he turn her away?

Being stranded in the middle of nowhere in a blizzard was not Mimi's idea of a fun time in the Tetons. Then why was she starting to think this sexy soldier could be more than her shelter from the storm? And the more determined Brant was to protect her and her unborn child, the more she believed that this honorable, irresistible military man was the only man for her.

Major Brant Western is a hardcore military doctor who is home from Afghanistan for a Christmas break. His home is a rustic cabin, ranch in Idaho where it gets really cold and they have sudden blizzards.  While Brant is out checking on his horses he spots car lights veering into the stream near his home.  Brant rescues a young woman and her fluffy little white dog from the car.

The woman identifies herself as Maura Howard and her bichon frise as Simone.  She was on her way for an unannounced visit to Gwen, Brant’s caretaker who lived in a smaller cabin on the property. Although Brant puzzles at the familiarity of the woman it doesn’t take long for him to recognize her as the wild socialite, Mimi Van Hoyt, whom he, and all of the world, have seen in the tabloids.

Mimi/Maura is reluctant to trust this handsome, quiet and intense looking man even though he did rescue her and he seems to be kind. She doesn’t have much choice about hanging around though since they are snowed in.  She decides to start cleaning and redecorating in order to relieve the boredom considering that Brant pretty much keeps to himself and avoids her.  Brant doesn’t know what Mimi/Maura is up to but it is clear she is hiding secrets.  And he’s having trouble understanding what a rich socialite is doing fussing around his place like a decorator.

Mimi is glad for a chance to be “a regular woman” for a change.  She is attracted to this strong man but he’ll be leaving town in a week to return to duty. Besides she believes he has a relationship with his neighbor friend and she isn’t going to repeat the mistake of getting involved with a man whose affections belong elsewhere.

Brandt is strongly drawn to ‘Maura’ but he knows he isn’t in 'Mimi’s' league. Besides he’ll be gone and she can keep her secrets. But then he learns her secret and he wants to protect her. It doesn’t seem likely that these two from opposite social ends could get together as they go their separate ways.

I enjoyed the conflict between the pair, the misunderstandings and the warm but denied passion. The ending is not completely surprising as it unfolds but it is very heartwarming. This is the second story I have read recently by Ms. Thayne and I appreciate her easy style and warm characters. If you want a quick, sweet romance this is a fine choice.

This book is set in Idaho for my Where Are You Reading challenge.

This book was provided as a free gift from Harlequin with an extra copy for Giveaway.
TO ENTER THIS GIVEAWAY for the print book - Two Winners:

1. Tell me if you have a favorite Harlequin book or category. If you haven't visited Harlequin recently, visit their site and tell me a category (genre) or book of interest you found there.  This is required for entry.


* This contest is only open to residents of US and Canada.
* This contest will close 10 PM (Central) on January 27, 2012.
The winner will be randomly selected from all entries.
The WINNER WILL BE ANNOUNCED on January 28.
Winners will have 72 hours to respond by email or the winners form linked in the announcement.
Posted by Martha Eskuchen at 6:30 AM