This is a fun and engaging listen.
Hounded: The Iron Druid Chronicles, Book 1 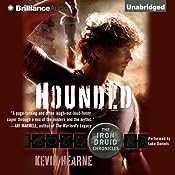 Publisher's Summary
Atticus O’Sullivan, last of the Druids, lives peacefully in Arizona, running an occult bookshop and shape-shifting in his spare time to hunt with his Irish wolfhound. His neighbors and customers think that this handsome, tattooed Irish dude is about twenty-one years old - when in actuality, he’s twenty-one centuries old. Not to mention: He draws his power from the earth, possesses a sharp wit, and wields an even sharper magical sword known as Fragarach, the Answerer.

Unfortunately, a very angry Celtic god wants that sword, and he’s hounded Atticus for centuries. Now the determined deity has tracked him down, and Atticus will need all his power - plus the help of a seductive goddess of death, his vampire and werewolf team of attorneys, a sexy bartender possessed by a Hindu witch, and some good old-fashioned luck of the Irish - to kick some Celtic arse and deliver himself from evil.

Review:  This is fast paced with good action.
Atticus tells the tale explaining his history and introducing some friends and enemies.  His friends include his Irish wolfhound, Oberon, with whom he speaks telepathically.  The dog is a fun character and his voice and narrow minded focus reminded me of the dog in the movie UP.  Atticus’ friends also include his lawyers (I know that’s surprising but he is a good client), who consist of a werewolf pack and a vampire who is available at night. Then there is Morrigan, the Chooser of the Slain, who shows up as a large crow.  It’s not quite clear if she is friend or foe although she has promised not to come for Atticus as long as he keeps annoying his long time enemy Aenghus Og, a petty and power hungry Celtic god.

Many centuries ago Atticus’ left a battle with a magical sword and Aenghus wants the power the sword would give him. Morrigan, and others, begin to visit to warn Atticus that, after all these years, Aenghus has located him and is determined to get the sword. The attacks start with Atticus battling a few faeries who have been sent to assassinate him. Then he and Oberon get threatened by a park ranger and police while hunting with the Huntress goddess.  With each fight we learn more of Atticus’ defenses and secrets.

A local witch coven joins the melee and again it isn’t clear if they are friend or foe. When Oberon and one of the wolfpack lawyers are kidnapped Atticus’ recruits backup from some other strange friends, including a powerful witch trapped in the body of a friendly barmaid. Although friends are there to help in the rescue, this time Atticus must face Aenghus one on one and death's messenger is standing by waiting for one of them.

I like Atticus as a character. Even though he is a powerful druid who has lived for thousands of years he is not obnoxiously arrogant like some of the ‘god’ characters. I enjoyed the fast paced action, the variety of characters and the mixed relationships. The narrator did a great job with the different voices, some humor and lots of tension.  I look forward to listening to more books in this series.

I picked this up at Audible based on high ratings and positive reviews.
I'll be linking this to Arizona for my Where are you Reading map and it will be added to my Audio, New Author and Just for Fun Challenges.
Posted by Martha Eskuchen at 6:31 PM