This is an emotional story set at Christmas time but sharing messages for anytime of the year. 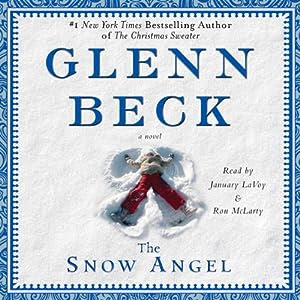 Rachel Price’s one happy memory from her childhood is of playing outside with her father, Mitch, on a cold and snowy day. In that moment he took her hands in his and called her his angel. She felt safe, loved, and protected. Rachel’s mother dies in a car crash a few years later—a sudden and unresolved ending to a complicated relationship. Mitch’s reaction to certain realities surrounding the death pushes Rachel away and confirms her fear that Mitch never truly loved her at all.

Years later, Rachel’s daughter, Lily, is the only light in her dark life. Rachel is consumed by an abusive marriage but too afraid to escape. On Christmas Eve, Rachel’s husband raises a hand to Lily in a moment of aggression that finally snaps Rachel out of her docile state. She realizes immediately that she must protect her daughter in ways her own parents didn’t protect her and remove Lily from the situation. Through the help of an old and dear friend, Rachel has a safe place to go, but first, she must say goodbye to her father.

As the snow falls on this Christmas Eve, Rachel learns that it’s never too late to start over. The Snow Angel is a tale about family, forgiveness, and learning to treasure our memories while allowing ourselves to move forward.

Review:
This is a heart wrenching story of a woman growing beyond childhood abuse and neglect, beyond marital oppression and abuse, to a place of personal fortitude and even forgiveness.

The story rocks between poignant memories of Mitch and Rachel.  Mitch is an Alzheimer’s patient struggling with the unfamiliarity of the nursing home.  He has flash back memories of his beloved wife whom he also feared and loathed because of her drunken meanness.  Mitch’s friend reminds him that he has a daughter whom he loved but Mitch is sure that he failed her.  Yet, as Christmas nears, his befuddled mind anticipates a visit from the young girl in the photo that he treasures.

Rachel portrays a perfect family to hide that she is in an abusive marriage. The sophisticated husband she adored as a senior in high school has become her controlling, oppressive jailor, isolating her from friends, verbally belittling her and sometimes physically hurting her.

Rachel has maintained an image for the sake of their 11 year old daughter, Lily. But Lily is old enough to realize that all is not rosy.  Rachel’s husband forbid her to see her father or her employer/surrogate parents, Max and his wife. Now Max has called Rachel to help him complete his last major tailoring order. Rachel begins to sneak out in the afternoons. Soon Lily is helping too and demanding to know why her mother has to help Max in secret. Lily also wants to meet her grandfather. Lily shows her maturity and child’s wisdom as she points out that her mother doesn’t have to protect her because “God is my shield.”

At the insistence of her daughter and Rachel’s new friend, the pastor’s wife, Rachel slowly reveals the pain of her childhood memories - an alcoholic mother who neglected or abused her. Then a distant father who didn’t protect his daughter and whose seeming indifference drove Rachel to a marriage where she found a new abuser. Through her revelations and her husband’s continued behavior Rachel finally realizes that he will not change and she must take control to change her own life and protect Lily from the potential lash back.

The emotions of Mitch and Rachel seem so real that I wondered how the author could know the frustration and fears to express them so well. I liked the secondary characters as well. The story is not preachy yet has a soft faith message of individual worth and forgiveness. The narrators do an excellent job of conveying the emotional struggles. The male narrator catches the wavering confusion and frustration of Mitch and the female narrator does a good job for Rachel and for the Swedish accent of Max.  As the final events of the story unfold I found myself holding my breath against threatened tears - you might not want to listen to the last disc while driving! Will Mitch recognize Rachel and will Rachel forgive her father? You won’t know until the ending.

Thank you to Simon & Schuster and Audiobook Jukebox for this audiobook to review.

One additional comment - I had a college raise their eyebrows when they noted I was listening to a book by 'Glenn Beck.'  I encourage everyone to not let any political feelings prevent you from enjoying this lovely story.
Posted by Martha Eskuchen at 4:53 PM