This is a dynamic dystopia- don't miss it. I wish the second book was here already!
Divergent 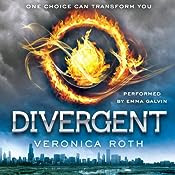 In Beatrice Prior's dystopian Chicago, society is divided into five factions, each dedicated to the cultivation of a particular virtue - Candor (the honest), Abnegation (the selfless), Dauntless (the brave), Amity (the peaceful), and Erudite (the intelligent). On an appointed day of every year, all sixteen-year-olds must select the faction to which they will devote the rest of their lives. For Beatrice, the decision is between staying with her family and being who she really is - she can't have both. So she makes a choice that surprises everyone, including herself.

During the highly competitive initiation that follows, Beatrice renames herself Tris and struggles to determine who her friends really are - and where, exactly, a romance with a sometimes fascinating, sometimes infuriating boy fits into the life she's chosen. But Tris also has a secret, one she's kept hidden from everyone because she's been warned it can mean death. And as she discovers a growing conflict that threatens to unravel her seemingly perfect society, she also learns that her secret might help her save those she loves.... or it might destroy her.

Review:
Beatrice lives in a time when there are five factions or communities that work together... or are meant to work together. Beatrice and her brother have been raised in Abnegation where they have been taught to be selfless. They don’t look at mirrors, they dress plainly and their focus is to care for others. When they reach the age of 16 they have to choose either their home faction or they can choose another. Each teen goes through an aptitude test to determine their best match.  Beatrice is told by her tester that she is “Divergent.” She doesn’t fit any one group profile. But she is to keep this fact secret as it puts her in danger.

Beatrice renames herself Tris and struggles through the initiation program with the others to determine if they will remain and what their rank or position will for job placement/priority.
Tris makes friends and enemies complete with jealousies, betrayal and loss.  She begins a secret romance with one of her trainers but with all the secrets floating it isn’t clear who can be trusted. There is clear trouble coming when Tris learns that some of the leaders are not who they appear to be but are working towards controlling all the factions. Since the enemy has found a way to manipulate the people of the community Tris and a small band are facing an army.

This story takes a bit of attention initially to keep straight the factions and characters. This might have been more difficult because I listened to the Audible and didn’t have a book to refer back to. The relationships between Tris and the other characters, the inductees, trainees, her family and her new boyfriend, are well developed and realistic.  The narrator does a great job with the numerous characters, the various emotions and with the intensity of the suspense. The story closes at a major turn of events and I am looking forward to the next book in the series.

A phrase I liked - stated after one of the other inductees dies.
“...Let the guilt remind us to do better next time.... a tool instead of a weapon...”

I picked this Audible up with my subscription and I am very glad I did.
Posted by Martha Eskuchen at 9:00 AM