Audible Book Review: How to Flirt With a Naked Werewolf

This is a fun listen with quirky characters, some mystery and a sexy romance. 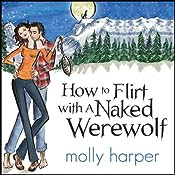 How to Flirt with a Naked Werewolf
Gerne:  Paranormal Romance, Comedy
My Rating:  4.5 of 5.0

Even in Grundy, Alaska, its unusual to find a naked guy with a bear trap clamped to his ankle on your porch. But when said guy turns into a wolf, recent southern transplant Mo Wenstein has no difficulty identifying the problem. Her surly neighbor Cooper Graham,who has been openly critical of Mo's ability to adapt to life in Alaska, has trouble of his own. Werewolf trouble.

For Cooper, an Alpha in self-imposed exile from his dysfunctional pack, its love at first sniff when it comes to Mo. But Cooper has an even more pressing concern on his mind. Several people around Grundy have been the victims of wolf attacks, and since Cooper has no memory of what he gets up to while in werewolf form, hes worried that he might be the violent canine in question.

If a wolf cries wolf, it makes sense to listen, yet Mo is convinced that Cooper is not the culprit. Except if hes not responsible, then who is? And when a werewolf falls head over haunches in love with you, what are you supposed to do anyway? The rules of dating just got a whole lot more complicated.

Review:
Mo is a girl after my own heart. She is strong and determined. She has moved to Alaska to make a break from a broken engagement and her very hippy and controlling parents. She didn’t plan to work right away but somehow steps right into working as a short order cook at the local gathering diner.

Mo is attracted to the sulky, quite guy in the place, Cooper, even though he makes it clear he doesn’t think she’ll make it past the first winter. Since Cooper wants to remain sullen and stand-offish, Mo goes out with  Park Ranger, Alan, who is a really nice guy but doesn’t give her shivers like Cooper. As Mo puts it ‘Cooper was caramel triple chocolate cheesecake deep fired on a stick. Alan was angel food cake, sweet and wholesome and nothing you’d regret.’

Mo suspects there is something really different about Cooper and then she learns it for sure when he shows up on her porch naked with a bear trap around his ankle.  Cooper takes Mo home to meet his pack when he is summoned because his grandfather is so ill.  The pack is at odds because Cooper is the Alpha but he is running from the responsibility. His sister is furious with him and attacks him whenever they are near to each other.

There is trouble in town because several people have been injured or killed by a wolf. Mo is sure that Cooper is not the wolf who is attacking people but he isn’t sure of himself so again he backs away from her rather than risk hurting her.

I really enjoyed the push, pull of the romance between Cooper and Mo with the added tension of conflict from Alan’s interest in Mo. The author gives good development of the characters and interesting wolf-pack dynamic as a family struggling under traditional rules. There is plenty of fun dialog and phrasing that had me chuckling out loud. This isn’t fast paced action but it moves along well with a good mix of romance and mystery.

The narrator did a really nice job of catching the quirkiness of the characters and I would enjoy more from both the author and the narrator.  I recommend this if you want a light fun read or  listen.

Posted by Martha Eskuchen at 6:00 PM