Highly Recommended! This second book in the series is even better than the first! 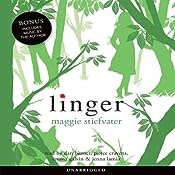 Linger Publisher's Summary in Maggie Stiefvater's Shiver, Grace and Sam found each other. Now, in Linger, they must fight to be together. For Grace, this means defying her parents and keeping a very dangerous secret about her own well-being. For Sam, this means grappling with his werewolf past...and figuring out a way to survive into the future. Add into the mix a new wolf named Cole, whose own past has the potential to destroy the whole pack. And Isabelle, who already lost her brother to the wolves...and is nonetheless drawn to Cole. At turns harrowing and euphoric, Linger is a spellbinding love story that explores both sides of love - the light and the dark, the warm and the cold - in a way you will never forget.

Sam has been staying with Grace, and although they have not been sexually active, they have grown accustomed to sleeping together and sharing most of their free time when Grace is not in school and Sam is not at work.

Spring is approaching and Cole is the first of the wolves to shift back. This is particularly frustrating to Cole since he is an angry, bitter young man and is trying to lose himself in the wolf. Isabelle finds him in her house and although she doesn’t like his attitude, she is inexorably drawn to his magnetic darkness. Isabelle lost her brother Jack who refused to remain a shifting wolf and died from the attempted “cure.”

That is only a minor irony in comparison to the big problem. Sam did survive the cure and he no longer shifts. But as the story moves on Grace becomes ill and it is fairly clear her body is fighting the wolf that struggles within her. Sam is burdened with the responsibilities of caring for the pack and preparing for their shift for the summer. He is initially disgusted and somewhat frightened by Cole’s arrogance and destructive nature.

Now Grace’s parents have forbidden him from their home and are trying to ground Grace. Grace will break away to be with Sam.  As Grace gets weaker and sicker, can Sam hold on to the “summer” girl he loves?

I loved the four voices in the Audio. There are tidbits of Sam’s songs through the book and then a bit more in the studio practice (a birthday gift from Grace.) I really like the gentle love story, the ethereal music and the suspense of what is to happen. I’m ready for the next book!!

I acquired this audiobook through my subscription at Audible.
Posted by Martha Eskuchen at 6:32 AM