This kept me up late for two nights wanting to finish – but knowing I would be sorry when it ended! 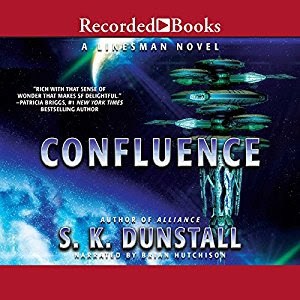 
Publisher's Summary
From the national best-selling author of Alliance, linesman Ean Lambert finds himself caught in a dangerous fight for political power.
The lines. Mysterious yet familiar: the key to controlling every ship in the galaxy. Once they were thought of as tools, but since linesman Ean Lambert discovered strange new lines in an alien vessel, they have become so much more - symbols of a power too great to ignore.
©2016 S.K. Dunstall (P)2016 Recorded Books


Review:
The Emperor of Lancia, Michelle’s father, is putting pressure on her to strengthen the position of Lancia over the New Alliance. Trying to force compliance, Emperor Yu has announced the betrothal of Michelle to further his own goals. His manipulations are cause for consternation to Michelle and Abram who are trying to maintain the fragile balance in the New Alliance. Yu has also told Ean’s usual bodyguard, (and the Emperor’s niece), Radko, that she must marry a high-ranking official chosen by Yu. The goal there is to allow the official to meet and have access to Ean.

Michelle’s new security officer determines it will be best to get Radko away from the fleet for a time. She assigns Radko a team and sends them on an undercover assignment to a hostile planet. Radko comes face to face with a previous attacker and the tensions ratchet up as she uncovers secrets. But will she get the chance to get the news back to her commander?

Meanwhile Ean is continuing to train new linesmen, even single linesmen who have previously been rejected by the line cartels. Ean is juggling the Confluence and other ships who are seeking to select their own crew if they aren’t assigned crew soon. The fleet has unwelcome Lancastrian visitors who are being a bit too pushy. Ean manages to block the theft of one of the ships but steps up the possibility of war by the ship movements. Then he has to protect his linesmen and protection team from another unexpected attack.

I thoroughly enjoyed the action, political intrigue and humor. I like the relationship between Ean and the lines although Ean sometimes loses focus on the human side of his world. There are a couple of slow building romances which add a nice touch. It is fine with me that there is no foul language and no sexual content. Although there is violence and death, it is not gory and graphic.

This is the third in the series – I strongly hope it won’t be the last. This series has wonderful world building, good plots with action and likeable primary characters – even some of the testier ones. There were new characters introduced in this book and I hope they will appear in future installments. I was a little sorry that the two linesmen characters who played a part in book 2 were barely mentioned in this book. I highly recommend the series and suggest you read them in order for best enjoyment.

Audio Notes: Brian Hutchison does a great job with the character voices and the intensities and nuances. I turned this on every chance I could, eager to hear more. This was great listening enjoyment for me.


I picked this up with my Audible Selections because I liked the series so much. It qualifies for 2017 Audio Challenge.

My Reviews of the Books in the Series:
Linesman My rating 5.0.
Alliance My rating 4.5
Posted by Martha Eskuchen at 5:30 AM