This is a dark, yet charmingly creative, tale of loss suitable to help young people who have a loved one facing serious illness.
A Monster Calls: Inspired by an Idea from Siobhan Dowd
Written by: Patrick Ness
Narrated by: Jason Isaacs 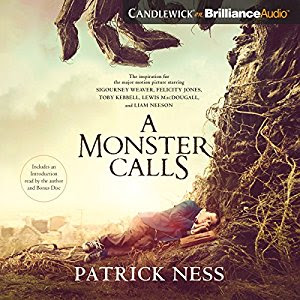 Publisher's Summary
The monster showed up after midnight. As they do. But it isn’t the monster Conor’s been expecting. He’s been expecting the one from his nightmare, the nightmare he’s had nearly every night since his mother started her treatments, the one with the darkness and the wind and the screaming.... This monster, though, is something different. Something ancient, something wild. And it wants the most dangerous thing of all from Conor. It wants the truth. Patrick Ness spins a tale from the final story idea of Siobhan Dowd, whose premature death from cancer prevented her from writing it herself.

Darkly mischievous and painfully funny, A Monster Calls is an extraordinarily moving novel about coming to terms with loss from two of our finest writers for young adults.


Review:
Conor is a troubled youth. He has suffered nightmares since his mother started her treatments. Nightmares with darkness, wind, cliffs and screaming. Conor struggles to be left alone in school although he is caught between the taunting bullies and the pitying teachers who cut him too much slack because of what he is dealing with at home.

One night, at 12:07am exactly, the Monster arrives at his window. Not the monster from his nightmares, but one rather closer to home. Conor sort of recognizes the Monster as the ancient yew tree that grows behind their house, up the hill, beside the old church. The Monster insists that he has been called to help Conor get through the nightmares… to the truth. The Monster tells three stories with the instructions that Conor is to tell the final, fourth story. Conor might think it is just a dream except for the leaves in his room one night and the poison yew berries all over his floor another night.

Even when Conor’s grandmother takes charge of him and moves him temporarily to her home, the Monster still shows up. The stories the Monster tells don’t really make sense to Conor, although the Monster will try to explain before their time is over. It all has to do with the unreliability of appearances, the vagaries of men, self deception, responsibility and the frailties of life.

This made me realize the impact that illness can have on others around a patient -- the children and the parents.  Especially children old enough to struggle with the idea of losing their beloved parent. The story is wonderfully imaginative even if a little on the dark side. I could see it being a helpful story to be shared when an older tween or younger teen who is facing illness, and mortality, in a family member.

Audio Notes: Jason Isaacs does a lovely job with the narration. He provides just the right accents to match the characters and convey the darkness of the Monster that is tempered with his caring nature. The narration evokes the appropriate emotions of fear, pain, despair, frustration and love. The audio is a great experience.


This was a story from my Audible TBR shelf. It qualifies for 2017 Audio Book Challenge, Mount TBR and "M" in Alphabet Challenge.
Posted by Martha Eskuchen at 9:16 PM