This is entertaining with a strong female investigator, lots of action and cyber mystery. 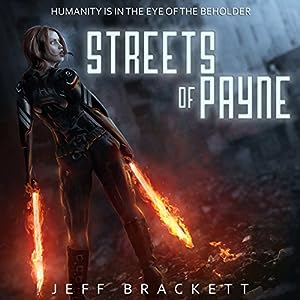 Publisher's Summary
Humanity is in the eye of the beholder. But for street-smart detective Amber Payne, it's the eyes that aren't human. Cybernetic implants replaced the organics she lost in the line of duty, and their appearance often causes Amber to doubt her self-worth. Rookie detective Kevin Glass is her partner. And though he may be new, Kevin's unparalleled skill as an elite cyber-surfer makes him an invaluable asset. When Alta Corp contracts the two of them to solve a case of high stakes data theft, they will need every bit of skill, experience, and determination to succeed. For the more they investigate, the more it becomes evident that this case is much more than it appears, and its resolution may forever alter the world in which they live.
©2013 Jeff Brackett (P)2013 Jeff Brackett


Review:
Amber Payne is a street-smart detective and a valuable asset to her employer, Securi-Tech. The company provided Amber with Cybernetic implants when she lost her eyes in an attack by street bangers. Amber may still have nightmares but she doesn’t let that stop her tough investigative talents, and hands-on defensive skills.

Amber is teamed with a rookie detective, Kevin Glass, who is a computer whiz. If she can get him to the computer, he can hack into the information they need to help solve their cases. They are called in by Alta Corp to solve a case of data theft that involves confidential, ‘need to know’ project plans. Amber and Kevin push to uncover the clues to solve the case but when they return to Alta Corp offices to make an arrest they meet unexpected resistance. As they battle the criminal mastermind – or madman as they see him – they uncover startling secrets that could endanger the world… or certainly the world of technology. The resolution of that first case changes their lives as Amber recuperates from crushed legs and Kevin battles inner demons that keep him awake most nights.

Many months later Amber and Kevin are called back to Alta Corp to investigate the kidnapping of one of their high-level computer researchers/analysts. They track down the kidnapper but have to go into the most dangerous part of the city to try to rescue the researcher. Before they can escape safely, Amber is attacked by an armed team equipped with armaments that even Securi-Tech has never seen. As Amber fights against eight enemies, Kevin faces cyber attackers who are making it difficult for him to provide intel to his partner. The battle at both levels is intense, leaving Kevin in a coma.

Amber gets a temporary partner and added assistance from an unexpected source which she isn’t sure she can trust. The clues begin to lead to a horrifying tie-in with the first case. A terrible danger could be released if they aren’t successful in bringing down the threat.

I really enjoyed the kicking action and the well woven mystery. The intense, smart characters and the easy flowing dialogue added to the entertaining mystery. I liked the cyber aspects as an integral element in the suspense. Perhaps a little graphic in violence for any younger or squeamish audience and there is limited cursing with some of that being creative words i.e. not current, real curses. I recommend this to any mystery buff and especially those who like cyber elements.

Audio Notes: Joy Nash does a fine job with the narration. She presents different voices and attitudes fitting the characters. I appreciated this in audio format.

I received this title for free in exchange for an unbiased review. I received the audio from the author through AudioBook Boom. This qualifies for my 2017 Audio Book Challenge.
Posted by Martha Eskuchen at 9:40 PM