Our Sunday School teacher had a FABULOUS message which I will post another day. We had nice worship songs and then our Pastor continued his series called BROKEN.

Genesis 3:7 says: “At that moment their eyes were opened, and they suddenly felt shame at their nakedness.” [NLT; emphasis added.] It was ‘at the moment’, when Adam ate the fruit of the tree of knowledge of good and evil, that the world became broken. BUT God had a plan for salvation; a plan for the best.

Most of us have had dreams from out childhood of what we want for our future. Sometimes we are fortunate to have encouragers tell us: “You can do anything, be anything, you want.” Others have “nay sayers” who say: “Be realistic; find something that is practical.” These might tell a talented young artist to study architecture instead. Many speak negatively and might say, disparagingly: “The apple doesn’t fall far from the tree.” And that is true – but remember who our original father is – we come from God’s tree. God writes our story, no one else.

Abraham (Abram), the father of Isaac, was promised that he would have a son and be the father of ‘many descendants.’ Abraham and Sarah grew older and couldn’t wait for God to fulfill His promise. They took matters into their own hands, presenting Hagar to Abraham. (Genesis 16.) Hagar became pregnant with a son, Ishmael, who, like the promised son, Isaac, had many descendants. But Ismael’s tribe were destined to always be at enmity with their neighbors. Abraham and Sarah settled for less. God fulfilled His promise with the birth of Isaac (Genesis 21), but now Isaac's descendants forever had enemies in the descendants of Ishmael.

Many times we must give up our current life, even “the good” life, to get “the Best” life that God has for us.
POINT: Give up the good for the best life – the abundant life – that Jesus died to give to you.

We often need to wait and prepare for HIS timing.

[This message continues which will be shared another day.]


God is SO AWESOME.
I had one of our worship songs picked out and included in the post.
But the Spirit said - 'that's not the one; look again.'
This is what I found for this message!
Verses for Today:
Genesis 21: 1-2 (NLT)
1 The Lord kept his word and did for Sarah exactly what he had promised. 2 She became pregnant, and she gave birth to a son for Abraham in his old age. This happened at just the time God had said it would.

Lord, help me to seek Your Will, Your Plan for me. Then give me patience to wait for Your Timing. 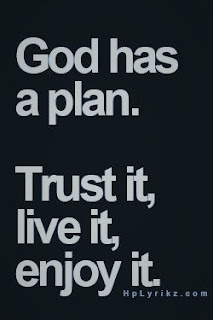 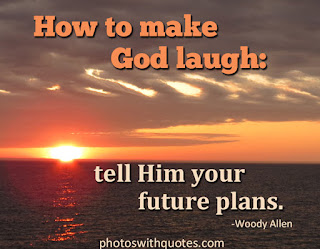 Posted by Martha Eskuchen at 3:41 PM