I was a little surprised that I finished this 16 hour audiobook in one week, but it was gripping/engaging. 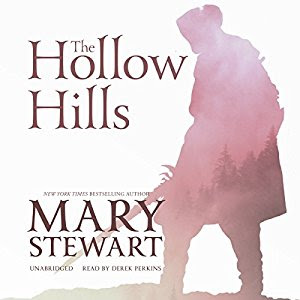 Publisher's Summary
The spellbinding, suspenseful story of how Merlin, the Enchanter, helped Arthur become the king of all Britain - a magnificent novel set in a time when no life is safe, no law stable.
Keeping watch over the young Arthur Pendragon, the prince and prophet Merlin Ambrosius is haunted by dreams of the magical sword Caliburn, which has been hidden for centuries. When Uther Pendragon is killed in battle, the time of destiny is at hand, and Arthur must claim the fabled sword to become the true High King of Britain.
The prophetic voice of Merlin communicates not only the bristling atmosphere of the story's ancient setting, but also its profound relevance to our own time. Once again, as she did in her best-selling The Crystal Cave, Mary Stewart provides a glowing recreation of pre-Camelot England.
©2016 Mary Stewart (P)2016 Blackstone Audio, Inc.


Review:
I read this story back in the ‘70s. I didn’t really remember the story but I remembered that I loved it and I loved the author, reading all her works available in those years. (I even have one that I have saved and I think I will pull it out to read soon.) When I saw this available for review I immediately sent a request. I am so glad that I did.

This is the story of Merlin, The Enchanter and the man. It is told as narrative from Merlin, beginning as he helps arrange the conception of Arthur. The tale follows Merlin, as the boy’s guardian, as he first protects and later mentors Arthur, covering the years from birth to coronation.

Stewart writes with beautiful imagery and powerful characterization. She begins with Merlin as a 22-year-old who has sacrificed certain aspects of ‘normal’ life to embrace (more accurate than control) his magical craft. There are certain aspects of magic that he has learned to use, particularly herbs and potions, disguise and some natural manipulations. The prophesy elements of his powers he cannot control. He is not even certain which god or gods gives him foresight. But he is certain when it is real and he follows the instructions as best he can interpret them.

The other characters are not developed as deeply as Merlin but those closest to him are portrayed with suitable depth to be able to imagine each person. Stewart lays the seedlings for the twisted character of Morgause, Arthur’s half-sister, and sets up some potential enemies. She also develops a few key friends who will be there to support Arthur as he learns who he is and steps confidently forward to receive the crown.

Stewart manages to weave in the history and legends of Ambrosius, Uther and Arthur. She paints the settings so they are visual to the reader, even the brief pictures of the Greek and Roman cities where Merlin travels as he stays away to avoid inadvertently leading anyone to the boy as he grows up.

The story itself is rich and enchanting. I found it, as the blurb says, “spellbinding”. With the addition of masterful, rich narration, I was transported to another time and place. I highly recommend this as a great listen and, for those who love all things Arthurian, this is a “do not miss” selection.

Audio Notes: If I was the sort of reviewer who effuses, I would just say “wow!” Derek Perkins was a perfect narrator for this work. The accent and narration pacing is wonderful. I encourage listening to the sample and you will get just a tempting taste of how lovely this experience is.


I received this audio book from the publisher through Audiobook Jukebox. It qualifies for my 2017 Audio Challenge.
Posted by Martha Eskuchen at 10:10 PM