Book Review: Codename Lazarus: The Spy Who Came Back From The Dead by A.P. Martin

This is an engrossing, and thought provoking, story of espionage during WWII.
Codename Lazarus: The Spy Who Came Back From The Dead
by A.P. Martin 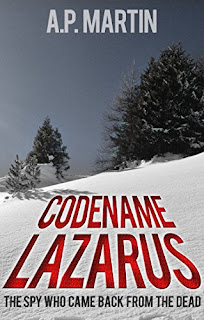 Spring 1938 and Great Britain is facing potentially lethal threats: the looming war with Germany; the fear that her Secret Service has been penetrated by Nazi agents and the existence of hundreds of British citizens, who are keen to pass information to her enemies.
John King, a young academic, is approached by his Oxbridge mentor to participate in a stunning deception that would frustrate Britain’s enemies. As King struggles to come to terms with the demands of his mission, he must learn to survive in a dangerous and lonely ‘no man's land’, whilst remaining one step ahead of those in hot pursuit.
Adapted from a true story, ‘Codename Lazarus’ takes the reader on a journey from the dark heart of Hitler’s Germany, across the snowy peaks of Switzerland to the horrors of Dunkirk, the Battle of Britain and the London Blitz, before reaching a thrilling and decisive conclusion, from which none of those present emerges unscathed.


Review:
John King is a graduate student who is completing two years of research in Heidelberg, Germany. As he and friends gather to commemorate his last days in Germany in 1933, he is saddened that one of his best friends has joined the SS - the Schutzstaffel, paramilitary, surveillance forces under Hitler. His friend, Joachim Brandt, rejects John for socializing with other friends who are Jewish. Joachim becomes angry that John does not show proper deference or respect to Joachim’s new uniform and life choice. From this point on the lives of these young men are on different paths.

John helps two half-Jewish friends, Rachel and David, to leave Germany to find careers in Britain while being helped by John’s parents. He later finds their parents in need of rescue and tries to arrange to get them out of Germany to safety.

The story describes the covert training that John is given and the planning for his accidental death. It then moves to his experiences as he steps into the role of a German Abwehr agent leading several sympathizer cell groups. The story pace picks up in the last quarter. John’s former German friend, Brandt, who has been undercover in America, is reassigned to Britain. His activities set him on a collision course with John's world. David, the other friend whom John helped move to England, has become a cop tasked with investigating the meager leads to a cell leader known as “Lazarus”. David is pulled in to help find German infiltrators and his path weaves towards Brandt and John’s tense confrontation.

The history is interesting with strong detail of physical settings, as well as social and political sentiments. The author does a good job describing the devastation and fears, first at battle scenes at Dunkirk, and again during the German bombing of London and surrounding communities. The author also portrays the impressive strength and resilience of the British people. The detail makes this story very engaging, if a bit slower in pacing. There were a couple of awkward point of view shifts and stronger editing might have helped to move the story through better action. I was wrapped in the intense climax when the book abruptly ended, leaving me with several questions.

This is a worthwhile read, especially for history buffs interested in life-like details of the earlier years of WWII. I also found the portrayed thought processes of the German and Russian sympathizers interesting as it made me more aware how citizens could betray their country with justifications of different political ideologies, including fascism, communism and socialism.


I received this through NetGalley. It qualifies for NetGalley Challenge, Mount TBR and “L” in Alphabet Soup Challenge.
Posted by Martha Eskuchen at 5:30 AM