Another wonderful sci fi adventure from Peter Riva, with engaging plot and characters.
Reaching Angelica: Book #2 in the Tag Series
by Peter Riva 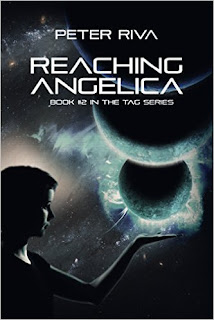 
In a massive spaceship destined for Alpha Centauri B, with a genesis crew including Zip the telepathic dog, his old friendly nemesis Cramer, and a computer being name Ra (now inhabiting a human form and calling herself Aten), Simon Bank emerges from a hundred-year coma and is hailed as an awakened hero. Stuck with unwanted responsibility, he is forced to try and solve the entire enigma of the universe—a small undertaking—before the spaceship, his friends, and all life on Earth are swatted out of existence by super beings he has accidentally awakened.

Simon’s only hope is to plunge into other dimensions with his mind—into the secrets of the universe’s pan-dimensions—as only he knows how. The fate of all life hangs in the balance as he struggles to prove himself worthy of the Path and the absolute trust his friends place in him. Simon knows all too well that if he fails there is no hope—none at all—for anyone and that includes his best friend, an artificial intelligence computer called Apollo, which he sadly left behind. Besides, Zip would not be pleased, either.

For fans of cyberpunk and classic science fiction, Reaching Angelica is the second book in Peter Riva’s Tag series, the comic, thrilling, and continuing saga of Simon Bank—ex–master system computer wrangler and very unlikely savior of the universe.

The story is still narrated by Simon Banks, the brilliant codifier who helped parent, if not birth, Apollo (aka Peter) and Ra (nka Aten), two sentient computers. These computers friends helped Simon, with a few select humans like Simon’s oppositional friend, detective Cramer, to spread peace to all of earth creating Simon’s image as a hero.

The mind thoughts are the mature Simon although now he resides in a 10-year-old SynthKid body after waking from a hundred-year coma. Ra has been reborn (downloaded/transferred) and is now a maturing teenage girl known as Aten. Cramer unexpectedly has joined the community on the ship traveling to colonize a new world. There was some concern about Cramer’s comatose state but Simon knows just how to jar him awake resulting in the mature (mostly), cunning of the former detective brimming in his seven-year-old body. Added to these characters is Zip, a telepathic dog on board who attaches himself to the group of heroes.

I enjoy the expanded universe exploration even if some of the scientific theory again passes over my head. It doesn’t hurt my appreciation of the perceived danger and concerted efforts needed to save mankind from extinction. Everyone works their part of the puzzle but, once again, it is Simon who must enter the world of virtual code. He is in a time pressure to locate and either hide from, negotiate with or outwit a superior, universe-controlling entity. It is feared that the entity may view humans as a virus to be wiped out rather than beings who can contribute to the entity’s plan or purpose… if only Simon can figure out what that might be.

The rapport among the characters continues to be fun and invigorating. The sci fi, cyperpunk adventure is fast paced with danger, excitement and a natural humor. This is the second book in the series and I do recommend reading The Path first to get a proper foundation for the characters and the path they are on. I highly recommend both books.


I received this through iRead Tours for an honest review. This qualifies for R in my Alphabet Soup Challenge. See my review of The Path and the Giveaway link*** HERE.***
Praise for Reaching Angelica
“Thrilling moments keep the suspense high in space. . . . The way Riva describes the mysteries of the universe is intriguing. . . . This cyberpunk world has its own laws of stretching brains wide with its mind-bending concepts.”
—Jake Vyper, Fantascize.com

Full tour schedule can be found at the author tour page at iRead Book Tours.