I really enjoyed the characters and action, as well as the faith message shared in this book.
Violets in February
by Clare Revell 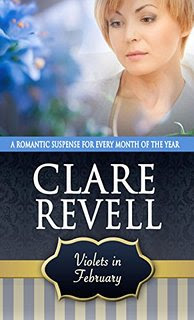 
When uptight missionary, Lucy Boyd is injured her only ride to the hospital 200 miles away is the scary looking guy who delivers their supplies every two weeks. Not only is he scary, he's obviously quite heathen based on the earring in his ear, the heavy metal music blasting from his truck when he pulls into the compound, and his salty language. Jed Gorman doesn't like people, especially Christians. Shuttled from foster home to foster home after the death of his parents, he's had enough "Christian Charity" to last a lifetime. The last thing he needs is that uptight missionary woman as a passenger. But when he sees that her knee is the size of a football he can't say no. It's going to be a rough ride, his truck is old, the monsoon season has hit, and there are guerrillas in the jungle...


Review:
Lucy Boyd is a straitlaced missionary doctor serving the people in Africa. She is respected by the staff and the natives. She looks down on and askance at the brash, swearing bloke who delivers the supplies, Jed Gorman. Jed is quick to taunt Lucy, needling her with his loud music and loud, salty language. Jed had a troubled past, being passed from one foster home to another, that left him with a disdain for Christians since his experience taught him they don’t life what they supposedly preach.

Lucy is the only doctor in the area for miles around. She is horrified when an injured father and young girl arrive for treatment after barely escaping from an attack by rebels in the jungle. Lucy hurts when she isn’t able to save her patients. Then an apparent rebel gang arrives with an injured leader. Lucy is reluctant to treat him but her boss reminds her that the mission is there to show mercy and grace to all in need. She treats the injury and the man is sheltered until he is able to travel again.

Lucy is exhausted from her tireless work and accidentally falls. Now that she has suffered a serious injury she is reluctant to follow the standard advice. Her boss and aides know that she must seek help at the city hospital. The only person available to get her there is Jed. He isn’t thrilled with the idea but a threatening storm leaves his battered, but trusty utility (Ute) truck as the only option.

The two slowly share about their childhood and their issues as they cope with the long and dangerous road. A washed out bridge send them off in another direction where they must try to escape the rebels.

I liked both characters in this story. They were a bit extreme but well developed with background that help shaped their personalities. I liked how Jed learns trust and faith through the ordeal while sharing a reminder to Lucy that she needs to give and seek forgiveness to settle demons from her past. The sniping opposites slowly develop a sweet romance while the action keeps the story moving at a good pace.

I am so glad that I received both book 1 and 2 in this series to read together. I enjoy the author’s clean writing style and her ability to share faith issues in real life settings. Maybe I rated the first book too harshly but I really had a hard time with the female lead, even though I recognize that the author appears to shape her characters on the extreme edge of their issues. I really enjoyed reading book 2 and think that the whole series would probably provide engaging entertainment together with good faith messages. I recommend these to readers who enjoy character driven Christian novels with a touch of suspense.


I received this title, and the first book in the series, from PBG (Pelican Book Group) Booklovers for an honest review. This qualifies for "V" in Alphabet Challenge.
Posted by Martha Eskuchen at 9:55 PM