Book Review: Much Ado About Highlanders (The Scottish Relic Trilogy) by May McGoldrick

This story provides a fine blend of romance and action with strong characters!

Much Ado About Highlanders (The Scottish Relic Trilogy)
by May McGoldrick 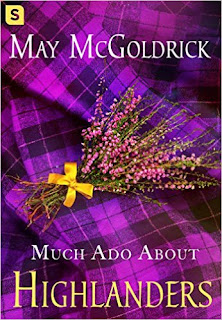 In the heart of Scotland, this Highlander is about to meet his match in a brand new romance from bestseller May McGoldrick.

Highland warrior Alexander Macpherson has lost his wife. When he agreed to take Kenna Mackay as his bride to advance his clan’s power in the north, he expected a bit of an adjustment. He didn't expect the sharp-tongued beauty to run away on their wedding night. Still, Alexander wants his runaway bride…and he has the sneaking suspicion that she wants him, too.

Kenna Mackay thought she was safe in a priory full of nuns learning the craft of healing, but when she is kidnapped by her own husband, the battle of wits begins anew. But even as passions ignite, a deadly secret from Kenna's past rises to the surface and put their new love in jeopardy. As a heartless villain closes in, two headstrong lovers find themselves locked in a struggle between evil and the power of undying love. And this time, Alexander is determined he will not lose his wife again.


Review:
This story picks up six months after Kenna fled her marriage. Kenna lost her mother as a young girl, after which her father gave her little affection. Once she reached marriageable age he arranged a favorable marriage with Alexander Macpherson. Kenna was not happy being treated as chattel and made plans to flee to a priory.

Alexander is the eldest of three young men who are known for their comradery, pursuit of women and adventure… as well as pranks. Alex was quickly struck with Kenna’s beauty and strength but wasn’t prepared for his bride to take off the night of their wedding.

Six months later Kenna and her cousin, Emily, are kidnapped by Alex’s younger brother, James. Alex and Kenna are shocked to come face to face and immediately start sniping at each other. A small band sets off to exchange Emily for other stolen property.

Alex and Kenna awaken the next morning to find they have been abandoned by the others. They soon discover they must work together and protect each other as they dodge English raiders being helped by brutal Scottish lowlanders. Kenna discovers that she has extraordinary skills beyond the healing techniques she has been taught. She possesses a stone passed on by her mother but someone evil wants to steal her gift.

A simple plan for romance goes awry and James and Emily find themselves at odds as well as Kenna and Alex. The reader gets to enjoy two growing and warming romances woven amid danger and intrigue.The story moves at a good pace with lots of action as well as the nice romances.

Kenna is a strong, feisty female willing to stand up for herself in a time when that is not expected. Alex is a handsome alpha male who is able to appreciate Kenna’s strength if only he can make her see that she can find love with him and acceptance in his clan. Their bantering is a fun part of the story adding to the romantic tension. I also liked the element of the stone pieces and the gifts they bring. I am hoping that the use for evil will be the downfall of the villain… maybe in the next story.

This is a very nice blend of sensual romance and action. Maybe not enough heat for some romance readers but nearly perfect for my tastes. Reading this reminded me why I have collected a handful of books by this husband and wife team. I recommend this to readers who like Scottish romances with spice and danger but not graphic sex. I would like to read the rest of the trilogy to find out what happens to the other women who have the gifted stone pieces.


I received this new release through NetGalley. It qualifies for my NetGalley Challenge and “M” in Alphabet Soup.
Posted by Martha Eskuchen at 5:30 AM