Audio Book Review: In the Mist of Killarney: An Irish Faery Tale by Robert McCallum

This was darker than I expected but engaging with a macabre irony.
In the Mist of Killarney: An Irish Faery Tale
Written by: Robert McCallum
Narrated by: David Ocean 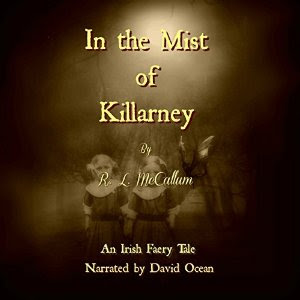 
Publisher's Summary
Ireland, 1911. After encountering a faery in the woodlands near his home in Tralee when he is a child, Professor Emmet Brehon spends his life pursuing the belief that faeries are more than just elements of mythology. While teaching Irish mythology and folklore at a university in Dublin, he receives a note from a stranger who claims to know where faeries can be found. Following the map that the stranger gives him, Emmet travels to a faerie circle and mound near Lough Leane in Kerry, where he encounters two ghostly little girls and a faery light. Snapping a photograph of the girls and faery light with his Brownie camera, Emmet's life becomes twisted when he discovers that he can't rid himself of the photograph, and disasters occur whenever he is present. He soon loses all in life that it is precious to him, including his sanity.
©2015 R. L. McCallum (P)2016 R. L. McCallum


Review:
Professor Emmet Brehon believes he saw a sweet faery as a child and has spent his life studying folklore and mythology. He is excited when he receives a note and map telling him where to find faeries in Killarney. He travels there one night in 1911 to sneak up on a faery mound with his new Brownie Camera. Emmet is ecstatic to get a photograph when he spots two ghostly little girls and a faery light with wings. He hurries away treasuring the camera in hopes that he will finally have proof of his discovery.

As soon as Emmet returns to the ancient inn where he is staying dark things begin to plague his life. Others die around him as he escapes a fire at the inn and then a train crash while returning to the city. He is able to get the photograph developed but the image of the almost transparent girls and the dot of winged light acts strangely. He hears girlish giggles and a banshee scream right before another death or accident occurs. He becomes more distressed as he leaves a trail of dead acquaintances and friends behind him. Emmet seeks to rid himself of the photo and the curse without success.

Emmet is taking his wealthy fiance’, Catherine, out for dinner planning to explain the problems he is having. Another accident occurs with the driver of their vehicle killing a woman in the street. He convinces Catherine that they must leave Ireland and travel far away to America to try to out run the faery curse. Needless to say, one can’t outrun a curse that you carry with you.

Emmet survives ship disasters and suspicious doctors when he finally arrives in New York. Before he is able to return to Ireland he will face other physical and ghostly encounters that bring him to the brink of madness. The doctors think they can help but will Emmet face medical danger too?

Note the darkness of the cover of this story and be forewarned. The story moves well, but is not light; it is dark. It is engaging in a macabre way and not good for bedtime reading. I liked the dark ironies and the tie-in to well-known events of the years the story covers. I think this is best suited for adult readers/listeners who enjoy dark folklore or even horror.

Audio Notes: I have to admit I was intrigued by David Ocean’s lovely brogue and most of the narration as it fits Emmet. Sadly, the female voices did not work so well as they were more strident or shrill than feminine. I did enjoy the added sound effect of the ghostly giggles and banshee wail although there were a few in the middle that were out of sync with the tale. For me, the audio made this a better read. However, readers interested in this should enjoy it equally in either format that suits them.


I received this audio book from the Narrator for an honest review. This qualifies for my Audio Challenge and "I" for Alphabet Challenge.
Posted by Martha Eskuchen at 2:25 PM