I really liked this great suspense and romance. 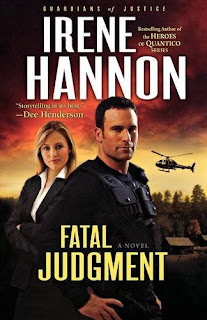 
U.S. Marshal Jake Taylor has seen plenty of action during his years in law enforcement. But he'd rather go back to Iraq than face his next assignment: protection detail for federal judge Liz Michaels. His feelings toward the coldhearted workaholic haven't warmed in the five years since she drove her husband--and Jake's best friend--to despair . . . and possible suicide.
As the danger mounts and Jake gets to know Liz better, he's forced to revise his opinion of her. And when it becomes clear that an unknown enemy may want her dead, the stakes are raised. Because now both her life--and his heart--are in danger.
Full of suspense and romance, Fatal Judgment launches a thrilling series featuring three siblings bound by blood and a passion for justice.


Review:
U.S. Marshall Jake Taylor has spent many years in law enforcement and is used to facing enemies to protect those he is assigned to. He is returning from assignment hoping to get some rest when he is called in to protect a federal judge. Not just any judge, but Liz Michaels, the widow of his best friend. Jake has some misconceptions that create an initial antagonism toward his charge. The longer he is around her the more he sees her actions seem to indicate that his views are wrong.

Liz lost her husband five years ago. Now her sister has been shot in the Judge’s home after seeking refuge from her sometimes violent husband. The spouse is always the first suspect but the investigation looks at others too. The authorities need Liz to back track through her files to locate someone who might be seeking revenge. When the killer slips through the protective detail to get to Liz, Jake realizes he has more to lose than just a charge.

This story has good romantic tension and suspense. I really liked Jake and Liz as the primary characters and Jake’s brother and sister add to the characters. The action is steady and I appreciated the faith based discussion between the characters. The romance develops with good chemical and emotional attraction that is fine without sexual scenes.

I have been eyeing this author and am glad I finally read one of her books. I will be glad to pick up more of her romantic suspense titles when given the opportunity. I recommend this book and author to those who enjoy strong characters and clean romance.

Posted by Martha Eskuchen at 10:04 PM