This is a half-hour of fun radio broadcast mystery. 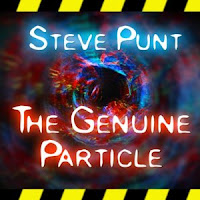 
Publisher's Summary
Time travel, wormholes, a lost security pass and a nice cup of tea. These are the elements that constitute Steve Punt's Theory of Grand Unified Comedy as he presents "Big Bang Day, The Genuine Particle" whirling into existence on BBC Radio 4.
Starring Reece Shearsmith and Geoffrey Whitehead, it's a comedy thriller set underground in the Large Hadron Collider and bears the unique property that every bit of physics in it is true. Theoretically at least.
©2008 Pozzitive; (P)2008 BBC Audiobooks Ltd


Review:
This is a very quick and fun listen. The story is a play of six characters. A British scientist raises concerns while discussing the work of two Russians who conjecture that when the Large Hadron Collider at CERN is turned on it may cause a wormhole that would allow time travel. This could allow a time traveler from the future to visit.

Now a group of the world's major powers, including Britain, America, Russia, and China (with a side visitor from Belgium) have gathered 100 meters underground in the Large Hadron Collider. They are there to try to intercept travelers from the future and gain control of futuristic weapons. The mystery includes an ID card, an electric buggy and the wormhole. I actually listened through this twice over the summer to catch the physics theory (not my best subject) and the twists!

This play was part of the Big Bang Day radio program which consists of five different plays. This episode was first broadcast on BBC Radio 4 on 10 September 2008.

Audio Notes: This was a fun broadcast type narration with a cast of narrators. The audio makes it more fun!


I ordered/downloaded this for free from Audiogo in August of 2011 so it is a TBR. This qualifies for my Audio Challenge.
Posted by Martha Eskuchen at 9:59 PM