This is fast-based and entertaining story of a joint venture between Russians and Americans to battle aliens.
Xenonauts: Crimson Dagger
by Lee Stephen (Author), Francois Cannels (Illustrator), 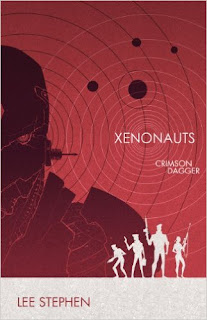 The year is 1958. The Soviet Union and the United States of America are entrenched in a Cold War. But for Mikhail Kirov, captain in the Soviet Fourth Army, life is relatively idle. After serving honorably in Hungary, Mikhail is stationed to the base of Zossen Wünsdorf, south of Berlin, where he lives in a government-issued house with his wife and six-year-old daughter. Gone are the days of quelling the Hungarian Revolution. The biggest challenge he faces now is teaching his little girl arithmetic. But things are about to change.
An object of unknown origin has been intercepted over the Atlantic by the Americans. Nuclear missiles are launched. The object crashes in Iceland. In a tense moment of necessity, NATO contacts the Kremlin. The Americans need help.
Crimson Dagger serves as a prequel to the video game Xenonauts, by Goldhawk Interactive, a real time strategy game set in the Cold War era. It is a story about cooperation amid extraordinary circumstances as rival superpowers are forced into camaraderie to combat a superior foe. Selected as the leader of this unlikely alliance, Mikhail must set aside he and the Americans' differences as they enter the unknown side-by-side, prompting the question: is the enemy of one's enemy truly their friend?


Review:
Mikhail Kirov, a captain in the Soviet Fourth Army, is serving at a quiet station after his heroic efforts during WWII. He is trying to teach his six year old daughter mathematics but she is only interested in learning to be a soldier to fight the Americans. Kirov is pulled away from his family for a special assignment.

Kirov and a team of Russian top soldiers are teamed with a handful of American Green Beret specialists to face a mutual enemy. A ship, apparently alien, has been shot down over Iceland and the joint troop is being flown in to board the ship and stop the aliens before they can do further damage or call for aid.

There is some suspicion between the Russians and Americans so they plan to keep a close eye on each other. However, when they run into the large, lizard-like aliens with highly superior weapons, the trained soldiers must quickly decide who the true enemy is if they want to save their lives. A mighty battle ensues with much loss of life – on both sides. One of the aliens is able to project thoughts into the mind of the humans and it is not clear what the plans are -- whether for escape or reinforcements.

This is a fast-paced and (too) short story. Kirov is a dedicated, intense soldier and I liked his character (including his faith). I also liked the focused sniper, Nina. The aliens and their weapons and modes of travel are nicely creative. I am not familiar with the Xenonauts game and I was only sorry that this story didn’t have a sequel.


This is a title I picked out for “X” for my 2015 Alphabet Soup Challenge.

Posted by Martha Eskuchen at 1:42 PM