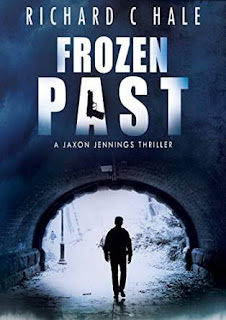 Jaxon Jennings. Cop. Homicide detective. Partner. He always had your back and rarely made mistakes.
Until the death of his son. Until the night he couldn’t save him. Until everything he held dear was taken away from him.
Now, a shell of a man, his reckless actions mark him as a burn-out. A Loner. A dangerous man whom many in the Fairfax County Police Department cannot trust. The criminals he pursues in the suburbs of Washington D. C. are nothing more than ways to bide his time until his next drink, next fix, next loss of control. His past haunts him no matter how hard he tries to hide from it.
So, when a boy’s body shows up floating under the ice of a quiet neighborhood pool, Jaxon finds himself immersed in a world where the ghosts of his past feel too close for comfort. A psychopath is using the innocent in ways that appear familiar.
Jaxon’s past is catching up with him. And the anger that seethes below the surface threatens to destroy not only his life, but the lives of a group of kids somehow connected with him. The answers are locked, frozen in the part of his past he refuses to confront. But people are counting on him. And he must do anything to save them.
Anything. Even if it costs him his life.


Review:
The story starts with a child disappearing; then another. The story continues to tell the sometimes gruesome tale of a broken cop and a serial killer who goes after children and teens. Jaxon is the cop who lost his own son to a killer years ago. When a boy’s body shows up floating in a pool Jaxon begins a chase with a criminal who seems to be always one step ahead.

Luke and Ellie have been best friends since third grade. Now they are in ninth grade and their relationship is warming up. Luke hear’s a strange voice as a group plays outside. Ellie’s dog disappears until Luke stumbles upon it during a snowball fight. The pair then get creepy facebook messages from a stranger. The kids pull a prank that turns into something horrible and soon the police are regular visitors.

Jaxon is intent on stopping the killer each death crushes his spirit more. As more dead bodies are found, including beheaded animals, the FBI is called in for some input. Soon Jaxon’s ex-wife, an FBI agent is working the case with him. Things might improve between them if Jaxon doesn’t fall into a greater depression over the death of more children.

Ellie and Luke need protection when it becomes clear the killer is targeting them. Can Jaxon and the authorities, or even Luke and his teen friends, stop the killer before he gets to Ellie?

The mystery and suspense is well done even though I found the murders disturbing. The young romance is an interesting and warm element to set off a bit of the gruesomeness. The story is fast paced with writing that is easy to read. However, I wouldn't recommend this for young readers. I do recommend it to readers who like a good thriller and aren’t squeamish about serial killing.


This title was from my Kindle library, free in July, 2012. It is the final book for my 2015 TBR Pile Challenge. It is still available as a free read.
Posted by Martha Eskuchen at 9:47 PM