Book Review: Joy to the Worlds: Mysterious Speculative Fiction for the Holidays by Four Authors

This is an engaging collection with mystery, time travel, humor and some creepiness!

Joy to the Worlds: Mysterious Speculative Fiction for the Holidays
by Maia Chance , Janine A. Southard, Raven Oak,G. Clemans 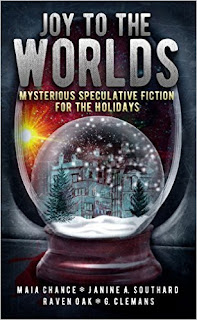 What do you get when you mix mystery and speculative fiction, then toss in the holidays for good measure? A mobster Santa, genetic hanky-panky, Victorian villages, time-travelling detectives, Krampus, eerie bell spirits, and more–this collection of short cross-genre fiction is the perfect counterpoint to traditional holiday reading!

This collection stars four authors, each with their own distinct style. National bestselling mystery author Maia Chance, who is famous for her cozy mysteries, dazzles with humor and folklore. IPPY award-winning science fiction author Janine A. Southard beguiles with unexpected time-travel science. Science fiction and fantasy bestseller Raven Oak offers a look into the gothic past. And for a whole new perspective, debut fiction author and art expert G. Clemans dives into the intersections of creativity and mystery.

Joy to the Worlds brings together eight short works that explore mysteries across time and space. Ranging from dark dystopian worlds to comedic retro-futures, four diverse writers find new ways to combine these disparate worlds into something everyone will enjoy.


Review:
This is an engaging collection although more dark than light. There are elements of Christmas, particularly folklore connections, but I think this need not be limited to holiday season reading. I liked meeting the new authors through two short stories each which gave me a good feel for their writing styles. I am inclined to look for longer works by a couple of the authors.

Wild Hunt by Janine A. Southard - my rating 4.25
Tyson Wallenstein is a preternatural (dead man) trying to prove his right to be part of the Wild Hunt. The hunt group, who are known as the best detectives…when not devouring miscreant souls… are out with King Herla trying to capture wayward pixies. Tyson is distracted by a local murder investigation while the Hunt continues on the original search. Tyson must prove his sleuthing expertise if he hopes to rise in the Hunt and gain his own hound dog.

The story has a nice writing flow with good description and well developed mystery. I enjoyed the humor that made the dead huntsman engaging.

Escape from Yorktown by G. Clemans - my rating 4.0
Lizzy is a teenager living in a galactic, live museum. Victorian Yorktown is a tourist town on an isolated planet where the inhabitants are stuck as full time reenactment characters. Lizzy is frustrated by her isolation but her mother is the Old Yorktown manager. Lizzy’a life gets excitement from an unplanned visit from J.D., the teenage son of the President of the Galaxy. He has slipped his security team but his father declares that he has been kidnapped. As Lizzy and her friend Cab try to hide J.D., they begin to run into bizarre clues that point to rebellion and conspiracy. J.D. may be in danger from threats but the biggest threat may be closer to home than anyone realizes.

This story is light with YA elements. I did enjoy the puzzle features that the youths unraveled. There were secrets but not a lot of awe in this piece.

Odysseus Flax & The Krampus by Maia Chance - my rating 4.25
This bit of darkness features a Krampus, a judgmental demon character who comes out on Christmas eve to capture bad boys or girls in his basket. The protagonist, Odysseus Flax, is an unlikely hero. His occupation is stealing from criminals. He inadvertently got off the train at the wrong station and finds himself the framed first for robbery, then kidnapping and worse. Odysseus has to hunt down the real Krampus if he wants to save his own reputation… and neck.

What I noted most in this story was the author’s wonderful ability at storytelling. It reminded me of a good ghost tale told in the dark around a campfire. There is a unique, steampunk element of surprise that caps the ending.


Ol’ St. Nick by Raven Oak - my rating 4.25
This is a version of the murder in a locked room. It is set on a spaceship and the victim is a mobster traveling under the alias of St. Nick. The dead man’s name really is Nick and he is the estranged father of the Captain of the crew who is taking the abandoned ship as salvage. Since the murder occurred after the crew boarded the disabled craft, everyone is suspect until they can be eliminated.

In addition to the mystery the story dealt with some prejudices, pitting the crew members against each other. The story also laughs at some holiday myths. I liked the space setting, the fast paced mystery and the alien crew member.

Bevel & Turn by G. Clemans - my rating 4.25
Anyone who has ever had or seen a Christmas whirligig (spinning angels or characters propelled by the candle heat) will enjoy this story built on wood crafting and a curse. Georgia comes from a long family line of wood crafters. Unfortunately many of her ancestors suffered serious accidents from their craft. Georgia’s parents seemed to have escaped the craftsman’s curse and they are hoping Georgia will too. However Georgia’s beloved Aunt and the prized three-tiered Christmas tower have disappeared and Georgia is obsessed with building a new whirligig in shop class. A new boy in class, Caleb, steps up to help Georgia finish her special project before winter break. Together they make a macabre discovery about the whirligig and the curse in Georgia’s family.

I enjoyed the time traveling element and the German history peppered through the story. The folk tale and history features show good research used to create a new tale.

Death Node by Janine A. Southard - my rating 4.25
This tale takes the reader on a time warp where alternate realities occur … either in spite of, or because of the time travel. The chapters jump between different times, past and present, as Marie Postrel, fulfills a mission to travel back in time. At first the style was a bit confusing but once I realized the author was presenting different time scenarios it became quite intriguing. It isn’t quite clear if Marie is to keep the directive of observation only or if she is being sent to proactively impact the people in the past in an effort to change the future. And perhaps the purpose changes with the timeline. I felt there were obvious clues that the reader gets but the time traveler misses. The ending is not the result I would have wished for but it makes for an engaging story.

The Ringers by Raven Oak - my rating 4.75
This is a story with a different tradition of bells and death, and fresh and twisted magic. The Ringers are soul eating wraiths that roam the town of Dekwood five nights before the Yule. The town people are oppressed and defeated in their daily drudgery with little hope of escape or change.
Elise is a fourteen year old girl hoping to enter the Acadame to study magic. Her father has always worked hard to set aside funds to support her efforts but now they have fallen on hard times. They move to Dekwood where magic is forbidden but Elise is not willing to settle for the depressing surroundings. When a friend who tries to help her disappears, Elise is even more determined to uncover the dark magic that is killing the community.

The story is creepy in a fascinating way. The plotting is precise and the story well-told. Even with the dark magic the author’s wonderfully creative imagination is revealed.


Mr. And Mrs. Mistletoe by Maia Chance - my rating 4.0
This story is a retro-future tale set in the 1950s that uses a theme along the line of The Stepford Wives. The local doctor tries to convince the spinster librarian, Miss Pynne, that she needs to find a mate. He reels her into an elaborate scheme by asking her to hunt down the missing Mistletoe Trophy. As she interviews the winners and scheduled contestants she begins to see several motives and bizarre likenesses in children of similar ages.

This is a bit funny crazy as well as creepy. I really liked the creative world of hover pads, Hooverpets and Robarmaids.


I received this title through NetGalley for an honest review. It is part of my NetGalley Challenge