This is a great suspense, police mystery with the bonus of a canine dog!
Suspect
Written by: Robert Crais
Narrated by: MacLeod Andrews 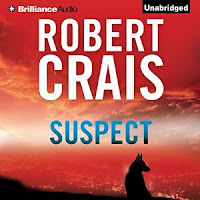 Publisher's Summary
Audie Award Finalist, Thriller/Suspense, 2014
For 25 years, Robert Crais has written extraordinary novels of crime and suspense. He is "a master of crime fiction" (Associated Press); "his novels get better with every new book" (Portland Oregonian); "Crais is hands-down the world’s greatest crime writer" (The Huffington Post).
But in Suspect, he may have written his most remarkable novel of all.
LAPD cop Scott James is not doing so well, not since a shocking nighttime assault by unidentified men killed his partner, Stephanie, nearly killed him, and left him enraged, ashamed, and ready to explode. He is unfit for duty - until he meets his new partner.
Maggie is not doing so well, either. The German shepherd survived three tours in Iraq and Afghanistan sniffing explosives before she lost her handler to an IED and sniper attack, and her PTSD is as bad as Scott’s.
They are each other’s last chance. He was a young cop on the rise; she was bred to guard and protect. Now they are shunned and shunted to the side. They are suspect. And together they will set out to investigate the one case that no one wants them to touch: the identity of the men who murdered Stephanie.
Nine months and sixteen days later, they remained free. They were still out there.
What they begin to find is nothing like what Scott has been told, and where it will lead them will take them both through the darkest moments of their own personal hells. Whether they will make it out again, no one can say.
Thrilling, emotional, intense, with some of the best characters and well-crafted writing in all of crime fiction, Suspect is further proof that "Crais just keeps getting better" (Publishers Weekly).
©2013 Robert Crais (P)2013 Brilliance Audio, Inc.


Review:
LAPD cop Scott James was working hard toward his career goal of becoming part of the Swat team. His goal is derailed one night when he and his female partner witness an assassination. After several masked men gun down two men in a car they turn their guns on Scott and his partner. They think they killed both officers but Scott survived his injuries, carrying guilt for his partner’s death.

Nine months later Scott has shifted departments as a last effort to remain on the police force. Scott teams up with Maggie, a retired military dog who was injured by an explosion that killed her handler. Scott is given a couple of weeks to prove that he and Maggie can make the canine team. He not only needs to retrain Maggie but he needs to train himself to become a ‘dog’ person and accept a dog as his new partner.

Scott is asked to meet with the new detectives who are working the murder case where his partner was killed. He is given access to all of the files and information. Slowly he uncovers discrepancies in the investigation. But the clues he finds bring a startling suspicion. A witness Scott interviews is murdered and Scott is being framed. Scott and his new friends, including Maggie, are in danger. Scott needs to pull the clues together before anyone else is killed.

I enjoyed the wonderful suspense as well as the author’s somewhat unique writing technique. The author presents the opening and later chapters from Maggie’s thought perspective. These alternate with chapters from Scott’s view and a few from the view of Scott’s new friend, one of the case investigators. Maggie’s perspective adds a whole new light to the intensity and emotion of the story.

I appreciated the unfolding of the murder plot almost as much as I loved the relationship that grows between Scott and Maggie. There were times I found my player hard to turn off. I will definitely seek more work by Mr. Crais. I recommend this title to readers of mystery and suspense, those who like police procedure and to those who love the dog element.

Audio Notes: MacLeod Andrews does a good job with the narration. He conveys Scott's angst and manages to portray a believable Maggie. The audio added to my enjoyment of this book and I recommend this as a fast paced, suspenseful listen.


This is from my Audible TBR shelf (2013) and qualifies for my Audio Challenge.
Posted by Martha Eskuchen at 10:27 PM