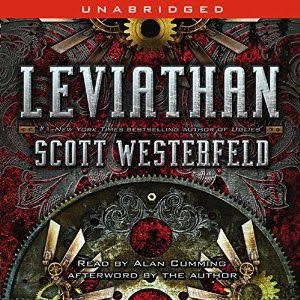 Publisher's Summary
It is the cusp of World War I, and all the European powers are arming up. The Austro-Hungarians and Germans have their Clankers, steam-driven iron machines loaded with guns and ammunition. The British Darwinists employ fabricated animals as their weaponry. The Leviathan is a living airship, the most formidable airbeast in the skies of Europe.
Aleksandar Ferdinand, prince of the Austro-Hungarian Empire, is on the run. His own people have turned on him. His title is worthless. All he has is a battle-torn Stormwalker and a loyal crew of men.
Deryn Sharp is a commoner, a girl disguised as a boy in the British Air Service. She's a brilliant airman. But her secret is in constant danger of being discovered.
With the Great War brewing, Alek's and Deryn's paths cross in the most unexpected way - taking them both aboard the Leviathan on a fantastical, around-the-world adventure. One that will change both their lives forever.
©2009 Scott Westerfeld; (P)2009 Simon & Schuster


Review:
Aleksander is a teen prince who is not fully accepted by his family because his mother was not of the right royal heritage. An assassination has sent him on the run with his formal fencing master, his mechanical tutor and three other dedicated, loyal servants. They left in the dark of night in a giant steam-driven machine (Clanker) known as the Stormwalker. They have to struggle to make it across the border while dodging attacks by the Germans.

Deryn is a young girl from London who knows about flying because her father was a pilot. She disguised herself as a boy to enlist in the British Air Service where she quickly proves her worth, even though she must maintain her secret. She is selected to join the crew of the Leviathan, a living airship fabricated from animals. The Leviathan is a marvelous creature with glow worms for light, hounds to sniff hydrogen leaks, bats to serve as defense and offensive weapons and talking lizards as messengers!

When circumstances bring Alek and Deryn together their mechanical and Darwinist leanings clash. Yet they soon discover that they must work together and pull resources from both specialties if they want to save their respective crews.

This is a wonderful mixture of steampunk technology and fabricated beasties. I can’t say that I liked the Darwinian theories so much, but it created the basis for interesting features – aaa -- make that creatures. I am still curious about the eggs that are being watched over. The alternate history draws from real events that led to WW1 and I found the young prince’s dilemma of inheritance and politics quite interesting.

This is a quick paced story that engaged me in the lives of the characters as well as the action. The writing is clean and straightforward. This would be good story telling for middle graders but it was engaging for me as an adult too. I recommend this to readers who enjoy steampunk and fantasy elements in a strong story with likable characters.


This has been in my Audible Library since August 2012. It is part of my Audio Challenge.

Posted by Martha Eskuchen at 4:09 PM