Audible Review: Resurrecting Home: A Novel by A. American

This is still entertaining although not as action packed as prior books in the series.

Resurrecting Home: A Novel
Written by: A. American
Narrated by: Duke Fontaine 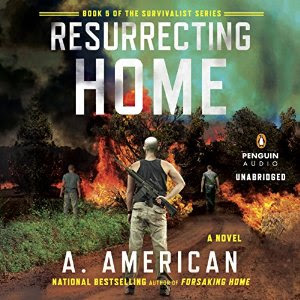 Publisher's Summary
Against all odds, Morgan Carter and his family have endured despite the deteriorating conditions surrounding them. Armed with survivalist tactics, Morgan's crew, alongside their new friends from the recently-liberated DHS camp, have worked together to build a sustainable community. But not all situations can be prepared for. When a massive wildfire threatens their very existence, they must decide: fight or flight?
From the author of the hit Survivalist Series books, Resurrecting Home is an action-packed adventure that depicts the harrowing possibilities of a world gone awry, and the courage it takes to protect what matters most.
©2014 A. American (P)2014 Penguin Audio


Review:
This is book five in an action, post apocalyptic series. EMP strikes have left the state of Florida with no power, water or other vital services. There are no food supplies and society has broken down. Morgan Carter and his family have survived and returned to their home neighborhood to establish a new life. They had been somewhat prepared so they have solar power, a water system and a supply of food that is quickly dwindling. They have received help from some tough army friends, led by Sarge, who Morgan met on his dangerous journey home (Book 1, Going Home).

Things have begun to quiet down a bit and the small community of seventeen or so are planning on setting up a garden and hunting for food to see them through the winter. In Book 4, Forsaking Home, they found Jess, who traveled part of the way home with Morgan and Thad, in the nearby government DHS camp. Sarge and his men helped the army capture the DHS camp tyrants and free Jess and the other people who were being used as slaves and worse.

There are those who are glad to be released and they begin to disburse to home or other destinations. But many of the people have become little more than cattle expecting to be taken care of even if they have to suffer abuse and loss of freedoms. They object when the army is given orders to move out.

Morgan is less concerned with the fate of the squatters at the camp than he is with the drifters who are challenging his neighborhood and nearby friends. He has to confront thieves who would go so far as to kill for a can of food, a house to live in or even a female to take for pleasure.

Morgan and his friends are mostly ready to deal with society threats but they hadn’t prepared for nature to flare up in a raging fire that is sweeping towards their community. Unless they can divert the conflagration, the band of survivors will be forced to pack up and move again.

This is a good continuation of the story, and moves at a good pace. There is some action but not as much as some of the prior books. This story addresses more relational issues as the group tries to rebuild and protect what they have.

I liked revisiting the characters and learning how they were getting on. I enjoyed the entertainment.

Audio Notes: Duke Fontaine has done a good job with the series. He portrays the different character voices and personalities helping to keep the story moving along well. The narration has enhanced my enjoyment of this series.


This is from my own Audible library and is part of my Audio Challenge. It is R for Alphabet Soup Challenge. :-)
Posted by Martha Eskuchen at 1:00 PM