I have become very engaged in the characters and story of this series.
The Remaining: Refugees
Written by: D. J. Molles
Narrated by: Christian Rummel 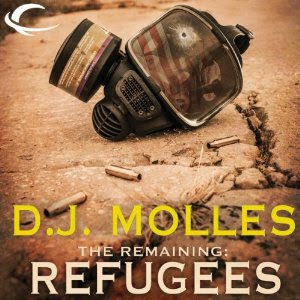 Publisher's Summary
He has fought the fight, and run the race. But the enemies never stop coming, and the race has no finish line. It has been three months since Captain Lee Harden found the survivors at Camp Ryder. With winter looming, Lee is on the verge of establishing Camp Ryder as a hub of safety and stability in the region. But not everyone agrees with Lee’s mission... or his methods. Growing tensions between camp leadership are coming to a head, and as Lee struggles amid the dissention and controversy, new revelations about the infected threaten to destroy everything he has worked for. The Remaining: Refugees is the third book in the best-selling The Remaining series.
©2012 D.J. Molles (P)2013 Audible, Inc.


Review:
The third book in this “infected” series, finds Captain Lee Harper working with the community at Camp Ryder and bringing relief that only he can provide. Lee and several men have developed a method to trap and clear the infected in nearby cities. They established these as outposts to extend the safety boundary and scavenging efforts beyond Camp Ryder. A scraggly young man appears at the gates of the camp specifically asking for Captain Harden. Jacob is a young biogenetics scientist who was sent by the Hometown Project leader in Virginia. He brings alarming news about the Project and the hordes of infected ravishing the northern states.

Two new groups have been set up at one outpost: Professor White and a dozen or so students, and crotchety Old Man Hughes with a small group. The Hughes group is willing to serve as an outpost in exchange for being primarily left alone, away from the rifts and arguments which are escalating at Camp Ryder.

Professor White is a pacifist who initially refuses accepting guns for his people. He is not really in favor of Lee’s plans to continue the military push to find more survivors in North Carolina.  White wants to make a run for the mountains to the west after hearing Jacob’s news. Jerry doesn’t want any more refugees and he conspires with White to set up a plan to take over leadership of the Camp from Bus.

Lee and his team are ambushed while trying to access another bunker. It seems that someone is specifically targeting him.

Lee sends out two paramilitary groups with distinct missions. Harper is to lead a group to set up a new outpost further to the west. The other convoy will head east to blow up bridges across the Roanoke River. This team may have to face a group of fanatics known as The Followers who have been rumored as attacking refugee settlements. Lee assigns LaRouche to lead this group after Lee is surprised by an old comrade and determines that he has to resolve issues before he goes out again.

Once again there is a lot of action and danger throughout the different segments of the survivors. Mr. Molles continues to develop the characters and their relationships as they deal with their new world, its distressing problems and the humanitarian and power conflicts. There is still a lot of violence and bad language but I am totally engaged. I purchased the next book so I can keep following the survivor struggles.

Audio Notes: I am still enjoying the narration by Christian Rummel. His character voices and intensity for the action adds to the entertainment quality of the series.


I had this in my Audible Library from 2014. I consider it part of my Audio Challenge and a TBR read.
Posted by Martha Eskuchen at 9:38 PM