This series is harsh (violence and language) but it is gripping emotionally and philosophically as well as being great entertainment.
The Remaining: Fractured
Written by: D. J. Molles
Narrated by: Christian Rummel 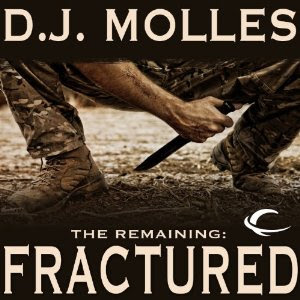 Publisher's Summary
This is the destiny of those who stand for others. Their honor will be bought in blood and pain. The Camp Ryder Hub is broken. Lee is nowhere to be found, and his allies are scattered across the state, each of them learning that their missions will not be as easy as they thought. Inside the walls of Camp Ryder, a silent war is brewing, between those few that still support Lee's vision of rebuilding, and the majority that support Jerry's desire for isolation. But this war will not remain silent for long. And in this savage world, everyone will have to make a choice. To keep their morals. Or keep their lives.
©2013 D.J. Molles (P)2013 Audible, Inc.


Review:
Half of Lee’s friends are off to the East to deal with bridges in Roanoke and the other half are off to the west to establish a ‘base’ in Eden. Lee himself has gone missing. Jerry decides this is a perfect time to make a move to take over Camp Ryder. Angie gets caught in the process and becomes an enemy and target of Jerry’s threats. He can’t remove her without angering the half of the Camp that were Bus supporters and creating questions among the others.

This is an intense installment in the series. Each of the separate groups have to face great hardship and the possibility that they will not be successful in their mission. The key characters are portrayed as they deal with the emotional depression and hopelessness of their situations as well as the moral decline they see in their circumstances and the personal moral choices they each struggle with.

It is not clear if Lee will survive the dangers he faces. LaRoche and Brother Jim continue to battle on philosophical issues that disrupt their mission which is already on a time crunch and facing attacks from The Followers. Harper’s team faces an infected attack that traumatizes certain team members. Really, all the primary characters are traumatized but some react more dramatically than others. Some are strengthened while others are shattered but many are hardened so they can press on in spite of the challenges. The situations had me gasping, wincing, inwardly saying “no, no no!” (and an occasional fist pump "yes!")  and hiding my eyes as if I could hide from the traumas.

I have found some symbolism in this series but I suspect that the symbolism may vary according to the reader. (This assumes that the author has intended symbolism beyond the considerable entertainment value of the story.) There is still much bad language and much violence. But the story transcends those negatives. I was ready to pick up the novellas and the next full installment when I competed this audio.

Audio Notes: When I finish this series I may well look for other books that Christian Rummel has narrated. He is fast becoming a favorite narrator for me. I continue to be impressed by his ability to shift seamlessly from narration to character voices. It is remarkable and I definitely recommend this in audio format.


I purchased this audio with an Audible Credit so I could continue in the series. It qualifies for my audio challenge.
Posted by Martha Eskuchen at 8:57 PM