What’s not to love? These eight historical Christmas romances are delightful! 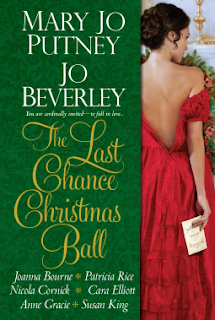 Christmas 1815. Upstairs and downstairs, Holbourne Hall is abuzz with preparations for a grand ball to celebrate the year’s most festive—and romantic—holiday. For at the top of each guest’s wish list is a last chance to find true love before the New Year…
A chance meeting beneath the mistletoe, a stolen glance across the dance floor—amid the sumptuous delicacies, glittering decorations, and swell of the orchestra, every duchess and debutante, lord and lackey has a hopeful heart. There’s the headstrong heiress who must win back her beloved by midnight—or be wed to another….the spinster whose fateful choice to relinquish love may hold one more surprise for her…a widow yearning to glimpse her long-lost love for even one sweet, fleeting interlude …a charming rake who finds far more than he bargained for. And many other dazzling, romantic tales in this star-studded collection that will fill your heart and spice up your holidays…


Review:
This is a charming and delightful collection of Regency romances. Several of them are second chance stories: young lovers are divided by parents; young men go off to war and return wounded and broken or do not return at all. There are young women alone who believe they are on the shelf and resigned to become a spinster aunt, a companion or a teacher.

Lady Holly is a determined matchmaker. She is hosting the annual New Year’s Ball that she calls the Last Chance Christmas Ball. She insists on inviting certain young ladies whom she suspects could find love if they don't give up. She is also careful to invite certain single men as dance partners and potential life partners.

Some of the couples are snowed in or meet by misadventure in the storm. Others know each other or meet at the house before the ball.

I was impressed how each of the authors wove the last chance party and theme into their different love stories. I enjoy these authors (The Word Wenches) individually and joining them together created a package that is greater than the sum of its parts. It is a delightful collection that I highly recommend to readers who like historical romance with the magic of Christmas.


Prologue by Jo Beverley –  This sets the scene by describing the event and the invited ladies with a bit of description for each circumstance.
My True Love Hath My Heart by Joanna Bourne – A younger son, Nick, tends to do a bit of spying for the government. He has followed his sweetheart to the house party where she is acting as a housemaid for some purpose unknown to him. Claire is a jewel artist who has broken off her affair with Nick for what seemed like good reasons at the time. She may be facing some danger and he will see that she doesn’t face it alone – even in spite of her own protests. This includes sexy intrigue.
A Scottish Carol by Susan King – Henry and Clarinda had a history of interest but her family had pledged her out of obligation and Henry went off to war leaving her behind. She becomes stranded at his home by the storm. Will they be able to move beyond their long ago feelings of abandonment to find a new chance? Misunderstandings sometimes lead to sweet reunion.
Christmas Larks by Patricia Rice – Ivo was wounded in war and on his way home to his mother’s beloved estate he suffers a head injury from an attack by highway men. Sarah was 17 years old when her childhood friend Ivo become engaged to another young woman. She has resigned herself to running an orphanage that is being set up in Ivo’s mother’s home thanks to his guardian’s generous gifting of the property. Sarah will nurse Ivo back to health what will happen when he learns the property is no longer his? And how are they going to handle the talking mice inside the walls? Strong characters and adorable little 'mice'!
In The Bleak Midwinter by Mary Jo Putney – Kim has returned to his home a broken and scarred warrior. He will only allow his faithful batman, Jamie to help him. He refuses to see any of his family or old friend’s including the young neighbor he once loved, Roxie. Roxie has tentatively agreed to marry Kim’s younger brother, Edward, so the adjacent properties can merged. But strong-minded Roxie isn’t going to let Kim go without one last chance fight to overcome his qualms. Heartwarming determination.
Old Flames Dance by Cara Elliott – Edward was very young when he fell in love with Lily. Their families separated them and Lily was married to an older man. Now Lily has returned from foreign lands, twice widowed. She can only dare to hope that she might renew a relationship with Edward but is stricken to learn he may be announcing his betrothal to the vibrant Roxie. He is shocked to recognize her among the guests even if she seems to be hiding in plain sight. Is there a chance for a new dance for these divided lovers? Distinct characters with latent sparks.
A Season for Marriage by Nicola Cornick – Caroline has been married to Piers for six months but their relationship is struggling. He saved her from compromise not realizing that she already had a crush on him. Piers wants nothing to do with deep love as he saw what happened to his own parents as they neglected their children when they were so absorbed with each other. Can a risk of scandal get him to give their marriage a new beginning? Restoration and submission can be so sweet.
Miss Finch and the Angel by Jo Beverley – Clio Finch is acting as companion to Lady Holly. Lady Holly thinks she will have to find someone else as the quiet girl doesn’t suit her outgoing personality. Gabriel has consented to come to his Godmother’s ball to dance with the single ladies. After all, most ladies seem more interesting if they have been seen in the company of a handsome rake. Gabriel isn’t planning to fall for any of those single ladies but he soon is intrigued to find out what secrets have forced Clio into hiding in the shadows. Will an angel help Clio find new Christmas magic? It is always fun to see the good and heroic side of a Rake revealed.
Mistletoe Kisses by Anne Gracie – Allie is an orphan now and will be ousted upon arrival of her cousin. She has sent all of the house servants on Christmas holiday so she can spending a solitary last Christmas in her childhood home before leaving to become a teacher. Allie is startled by a commotion outside and discovers a carriage accident which strands Lord John and his young, rather spoiled sister. John and Lucilla are soon caught up by Allie’s competence and her warm Christmas spirit of giving. Could Allie find a special gift this Christmas? This has a stumble with a delightful recovery.


I picked this up at NetGalley. It qualifies for my NetGalley Challenge.
Giveaway Link: I was invited to one giveaway but it ended in 24 hours. So here is another I found that is open until October 15: Thank you Ms. Elliott!  http://www.caraelliott.com/contests.html

Posted by Martha Eskuchen at 5:00 PM