This is engaging with lots of action. 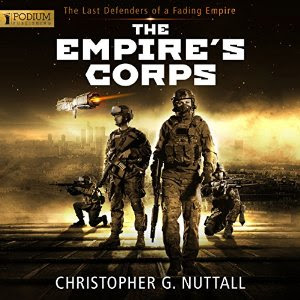 
You should never speak truth to power
The Galactic Empire is dying and chaos and anarchy are breaking out everywhere. After a disastrous mission against terrorists on Earth itself, Captain Edward Stalker of the Terran Marine Corps makes the mistake of speaking truth to power, telling one of the most powerful men in the Empire a few home truths. As a result, Captain Stalker and his men are unceremoniously exiled to Avalon, a world right on the Rim of the Empire. It should have been an easy posting....
Well, apart from the bandits infesting the countryside, an insurgency that threatens to topple the Empire's loose control over Avalon, and a corrupt civil government more interested in what it can extort from the population than fighting a war. The Marines rapidly find themselves caught up in a whirlwind of political and economic chaos, fighting to preserve Avalon before the competing factions tear the world apart. They're Marines; if anyone can do it, they can.
The battle to save the Empire starts here.
@Book Revie2012 Christopher G. Nuttall (P) 2014 Podium Publishing


Review:
Captain Edward Stalker of the Terran Marine Corps is a sharp Marine officer. But the Civil Guard on Earth are the main authority force of the Empire. The controlling senate is corrupt and doesn’t want the honesty and integrity of the Marines. Stalker is banished after he impugns (“speaks truth to power”) the Senate for blaming his troops for tragedy after they had to step in to resolve a terrorist attack that the Civil Guard made worse instead of quelling.

Stalker and his corps are sent to Avalon, a world on the outer rim of colonized space. Avalon’s main settlement is Camelot and their society is in major trouble. Corruption has entered the governmental system and the city is divided between the rich and powerful and the suffering indentured classes. The Governor can no longer act without the authority of the corrupt Council. The convicts sent to the planet have escaped to become bandits in the hills. There is an underground group known as the Crackers who have lost one rebellion seeking reforms but are rebuilding. And the local Civil Guard is poorly equipped, poorly trained and infiltrated with insurgents.

Stalker has to tread lightly to stay within the chain of authority in addressing issues on the planet. Although they recognize corruption and suspect spies they have problems finding proof and determining who to trust.

The universe history and political and social imbalances are presented well, although it seemed that, with a few exceptions, the only good, honorable and trustworthy people were the Marines. I liked how each Chapter starts with a quote that fills in Empire history, marine traditions or insurgent strategies. There is personal interaction intermingled with plenty of physical danger and action that moved the story along at a good, engaging pace. The characters could use a bit more depth but I generally enjoyed the several primary characters: Captain Stalker, an intense Rifleman, Jasmine, an Avalon training recruit, Michael, banished Professor Leo Caesius, and a few more.

I would love this story except for two elements: there is a lot of cursing/foul language and a great deal of sexual innuendos and salacious banter. These will probably have me looking to other series for my military space opera enjoyment. I do recommend this book to readers who like sci-fi military action and aren’t put off by bad words and bawdy banter.

Audio Notes: Jeffrey Kafer does a grand job with narration. He captures the voices and conveys the intensity and danger of the situation. The audio made this an faster, more interesting read for me.


This was from my Audible Library as a 2014 selection. It qualifies for my Audio Challenge and I count it as a TBR since it is not a 2015 selection.

Posted by Martha Eskuchen at 9:39 PM