I enjoyed the action, mystery and magic of this story.
The Banished of Muirwood (Covenant of Muirwood Book 1)
by Jeff Wheeler 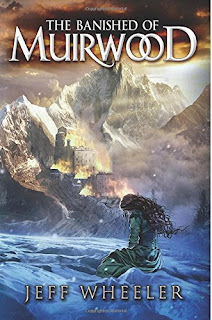 In a world full of magic and mystery, eighteen year old Maia is the exiled princess of Comoros and rightful heir to the throne. Forced to live as a servant in her enemy's home, Maia flees her captors and begins a perilous quest to save her people. To survive, she must use magic she has learned in secret despite the fact that women are forbidden to control it. Hunted by enemies at every turn, Maia realizes that danger lurks within her, too. Her powers threaten to steal not only her consciousness but also her sense of right and wrong. Can she set herself free and save the realm she lovesCeven if her people have forgotten her? In bestselling author Jeff Wheeler's fantasy epic, the answer may be only the beginning to Maia's journey throughout the mystical land of Muirwood.


Review:
Young Maia lives in a world where women are not allowed to read or write -- except if they are truly a Princess. Women are also forbidden to be Dochte Manders who are members of a religious order who use magic. When she was very young Princess Maia was allowed to train under a very special Dochte Mander who taught her forbidden skills. Maia was nine when her mother lost another son at birth and her parent’s marriage fell apart. Although her father, the king of Comoros, loved Maia he was obsessed with having a son as an heir and also with removing the magical elements from his kingdom. Maia was sent to the border lands to learn the duties of being a mediator. She returned three years later to find her mother banished and a new woman in the castle with a young son who looks a lot like the King.

Maia is declared a bastard and banished from the castle. She is sent to live with one of her stepsisters who mocks her and reduces her to a despised servant. The king also removed all of the Dochte Mander from the kingdom which resulted in hardship and unrest.

After some time in her desperate position Maia is called to the king who sends her on a quest that will take her through enemy lands to the most northern of the seven realms. The journey begins with a kishion guard (a trained assassin) as her sole companion. Along the way they are joined by a skilled hunter Jon Tayt and his loyal boarhound. Jon Tayt agrees to guide them even though it is clear the way will be fraught with dangers. Whenever Maia uses magic to protect them she also opens her mind to the Dochte Mander who are seeking to capture her.

Maia also meets a handsome man who is the Dahomony king’s collier (stable master). Feint Collier is a dangerous man who is incessant on pursuing Maia, knowing that she was pledged to his king as an infant until her father broke that pledge.

This was the first story I read by Mr. Wheeler and I enjoyed the writing and the world building. There is plenty of swordplay and intrigue that moves the story along well and there are some nice bits of wisdom and symbolism. The political history and personal issues are nicely filled in through Maia’s dreams. However there is so much going on in the intrigue that I felt as though I was playing catch–up in the Muirwood world. I really enjoyed the characters although I thought that Feint, who is two years younger than Maia’ 18 years, is rather young for the confidence and authority he displays.

There were some positive points of the ending but I was a bit disappointed that it left many points which can only be resolved by reading the next book. I recommend this to readers who enjoy engaging fantasy as long as they are prepared to read on in the series.


I received this through NetGalley. It is part of my NetGalley Challenge.
Posted by Martha Eskuchen at 6:00 PM