Audio Review: The Sniper and the Wolf: A Sniper Elite Novel by Scott McEwen, Thomas Koloniar

This is full of entertaining, intense action and danger.
The Sniper and the Wolf: A Sniper Elite Novel
Written by: Scott McEwen, Thomas Koloniar
Narrated by: Brian Hutchison 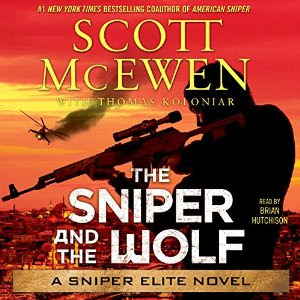 Publisher's Summary
From the coauthor of the number-one New York Times best seller American Sniper comes a heart-pounding military thriller in which American hero and SEAL team sniper Gil Shannon joins up with an unlikely ally in order to stop a terrorist plot bent on destruction across Europe.
Hot on the trail of The Wolf, a rogue Russian military sniper turned Chechen terrorist, Gil Shannon turns from hunter to hunted when his mission is exposed by a traitor high up in US government. Shannon must turn to an unlikely ally - a deadly Russian special operative - to help even the odds. But when they discover that The Wolf is just the tip of a global terrorist plot whose goal is to upend the US economy and the stability of the Western world, Shannon and his team of operatives must track the terrorists down before their plan comes to fruition.
Shannon comes head to head with legions of enemy fighters all across Europe in this breathtakingly cinematic and realistic military thriller, ending with a faceoff between Gil and the one sniper who may be his equal shot. Will he survive?
This third action-packed and battle-filled adventure in the Sniper Elite series takes listeners along for a white-knuckle ride across Europe in the company of American soldiers, Russian special operatives, and global leaders - and will keep you on the edge of your seat until the final scene.
©2015 Scott McEwen and Thomas Koloniar (P)2015 Simon & Schuster


Review:
Gil Shannon is a CIA operative called the Sniper. He is known for his fierce determination to see a mission through and remove any terrorist threats he can reach. He has been sent to remove one threat but comes upon a conspiracy that included false identity, agency betrayal and ties to Sasha Govolanko, a renowned former Russian sniper known as the Wolf. Gil joins up with a Russian specialist, Degrunov, as they chase the Wolf through Paris, Sicily, Turkey and ultimately Russia. Along the way Gil and Degrunov become the hunted prey of the Wolf, as well as the hunters.

Meanwhile several dishonest CIA operatives around the world are juggling and running as a strict leader, Robert Pope, intent on cleaning house, becomes the newly appointed commander of the CIA. As Pope, and other leaders at the highest levels, including the President and a General, share information about Gil’s locations and actions they learn how easy it is to speak too freely around employees who may have been compromised or turned by greed. There is a lot of behind the action, political maneuvering to balance and negotiate interests. Gil keeps creating ‘messes’ and his superiors are continuing to use the problems to their best political interest and advantage.

I enjoyed the fast paced, dangerous action and the intrigue. Scenes bounce from one side of the world to the other as Gil deals with foreign killers and an assassin tracks the rogue CIA agents. There are parts of the story that sounded like an armory inventory. There is some harsh language and, of course, much violence. The writing has a feel of Marvel comic heroism to it which provides good entertainment.  The level of realism is either scary or questionable - I am undecided. I recommend this to readers/listeners who like action, military thrillers.

Audio Notes: This was slow going as the format required that I listen to it on my computer instead of my player. I would much prefer to download this through Audible than in the format from the publisher. The quality of the production is very good and Brian Hutchison does a good job with the narration. He provided varied voices and accents and conveyed the intensity of the story. The audio enhanced my enjoyment for the story.


I received this audio from the publisher through Audiobook Jukebox. It qualifies as part of my Audio Challenge.
Posted by Martha Eskuchen at 11:59 AM