Sookie faces conflict with friends and mystery with family. 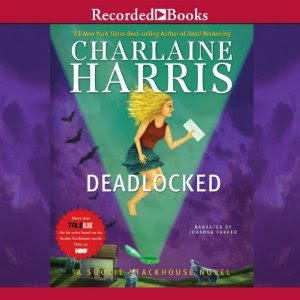 Publisher's Summary
It’s vampire politics as usual around the town of Bon Temps, but never before have they hit so close to Sookie’s heart….
Growing up with telepathic abilities, Sookie Stackhouse realized early on there were things she'd rather not know. And now that she's an adult, she also realizes that some things that she knows about, she'd rather not see—like Eric Northman feeding off another woman. A younger one.
There's a thing or two she'd like to say about that, but she has to keep quiet—Felipe de Castro, the Vampire King of Louisiana (and Arkansas and Nevada), is in town. It’s the worst possible time for a human body to show up in Eric's front yard—especially the body of the woman whose blood he just drank.
Now, it's up to Sookie and Bill, the official Area Five investigator, to solve the murder. Sookie thinks that, at least this time, the dead girl's fate has nothing to do with her. But she is wrong. She has an enemy, one far more devious than she would ever suspect, who's set out to make Sookie's world come crashing down.
©2012 Charlaine Harris, Inc. (P)2012 Recorded Books, LLC


Review:
Sookie and her vampire ‘husband’, Eric, have been having trouble getting together. Sookie has been busy with her work at Merlot’s and with Dermot and Claude, her two faery relatives, who are living with her. Eric has been busy trying to get his bar back on even footing while waiting for his superior to come question the death of another vampire.

Finally Felipe de Castro, the Vampire King of Louisiana, arrives and Sookie has to make a command appearance. Bill and another wolf/guard at Eric’s house warn Sookie to turn around and go home. But she insists on making her appearance to Eric’s king. She isn’t happy to see the ill-behaved vampire guests but then she walks into their bedroom to find Eric feeding off another woman who is sprawled across his lap. The young, taunting woman is sent out while Sookie retreats to the bathroom to get control of her emotions. Shortly thereafter the police arrive to investigate the death of the young woman on the front lawn. It is pretty clear that someone is setting Eric up and driving a wedge between Eric and Sookie. Bill and Sookie set off to investigate.

Sookie has suspicions that Sam’s new girlfriend really doesn’t like her. But Sookie is dealing with other issues at home. Her great-great-grandfather, Neil, has suddenly returned from the mostly sealed faery land and he disappears with Claude. This leaves mild, Great-Uncle Dermot to try to manage the restless crowd of fae and elves at Hooligans bar.

Many of the dangerous elves are being drawn to Sookie and her home. It appears that she has uncovered a unique and coveted fae artifact that her grandmother had hidden in a desk that was in the attic. Sookie is kidnapped and bit by bit the clues indicate that she has an enemy closer than she thinks.

This is book 12 and although it does not have as much violence and action as some of the prior books, I found it interesting. There was mystery and conflict that kept the story moving well.
I am looking forward to reading book 13 to see how this series concludes.

Audio Notes: Johanna Parker is the voice of Sookie for me. She does a wonderful job with the accents and the story to enhance the enjoyment.


This was from my Audible TBR shelf. It counts for my Audio Challenge.
Posted by Martha Eskuchen at 7:56 PM