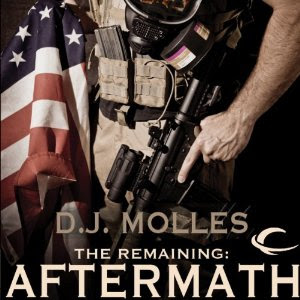 Publisher's Summary
Nothing has gone according to plan.
To Captain Lee Harden, Project Hometown feels like a distant dream and the completion of his mission seems unattainable. Wounded and weaponless, he has stumbled upon a group of survivors that seems willing to help. But a tragedy in the group causes a deep rift to come to light and forces him into action. In the chaos of the world outside, Lee is pursued by a new threat: someone who will stop at nothing to get what he has.
The Remaining: Aftermath is the second book in the best-selling The Remaining series.
©2012 D.J. Molles (P)2013 Audible, Inc.


Review:
Captain Lee Harden is committed to the Project Hometown mission: survive, rescue and rebuild. Lee has survived his first week running and fighting through the plague-infected humans. Now he has stumbled into a community of survivors but he is not completely welcome. Although the leader of Camp Ryder, Bus, is willing to accept Lee’s offer of help, the opposing power-hungry politician, Jerry, doesn’t want more outsiders and challenges Lee’s veracity. Even though Lee is under medication trying to recoup from injuries he becomes the prime suspect when an attack by the infecteds appears to have had inside help to get inside the fences. Jerry and his supporters are quick to label Lee as a spy and saboteur with connections to the brutal outside raider group led by Milo. Now Lee is forced to prove that he can fulfill his promise of accessing a bunker and bringing desperately needed supplies.

Lee sets out with a handful of men in a vehicle with limited gas. Harper, an older gruff man who initially tried to turn Lee away, chooses to go just to spite Jerry. Miller, the wiry young man who helped rescue Lee while he was running from Milo's goons is another volunteer as well as a brawny older teen, Josh. Surprisingly, a jittery Doc, steps up at the last minute to go with them.

The team has to scavenge gas and fight infecteds and looters just to get to the bunker location. There they find a small camp of survivors led by Father Jim, a local pastor. They don’t have room to bring Father Jim and the supplies back but they let them know where the camp is in case they can make it there.

Lee insists on stopping in Smithfield because he promised the camp’s cook that he would look for her sister, Julia. They find the community in Smithfield inside the hospital. Lee hopes to make allies but instead he faces betrayal and danger. The group are being threatened by Milo and Lee doesn’t know who can be trusted and who can’t.

Before getting out of Smithfield, Lee has to fight his way through infecteds and Milo’s thugs. New characters are added as Lee gets help from another soldier, LaRouche, and Julia, a dedicated medical professional,

I was a little distressed by the foul language but I was gripped by the plot and action. D. J. Molles manages to create characters and relationship dynamics that I got invested in. The story and action kept me glued and then I was delighted with some wonderful descriptions. I was glad that I had book three in my Audible library so I could continue the story.

Audio Notes: Christian Rummel does a terrific job with the narration. Each character gets the right voice and the intensity of the action is conveyed through the narration. It is possible that reading the book might let the reader skim over the bad language easier. Still I am definitely enjoying listening to this series.

See my review of The Remaining, Book 1.

I recently picked this up with an Audible credit so I could continue the series. This is part of my Audio Challenge.
Posted by Martha Eskuchen at 9:50 PM