This is a lovely romance with a time travel, adventurous historical setting of a wagon train. 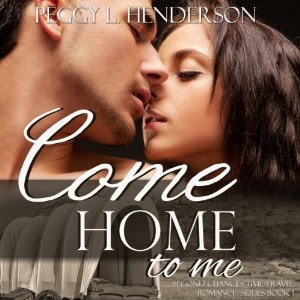 Publisher's Summary
Jake Owens is tired of life on his parents' Montana ranch, catering to city folk who want a taste of old-fashioned country living. He enjoys life in the fast lane, with fast cars and even faster women. When he falls in with the wrong crowd and is accused of murder, a stranger's bizarre offer at a second chance might be his only hope to clear his name.
Rachel Parker is highly devoted to her family. A tragedy prompts a daring move to the Oregon Territory for a fresh start in a new land. After meeting the wagon train's scout, the meaning of a fresh start may be more than she ever imagined.
Jake can't believe he's been sent back in time to act as scout for a wagon train headed for Oregon, and given the added burden of keeping one emigrant woman safe during the journey. He and Rachel are confused by their attraction to each other. Jake's ill-mannered, unconventional ways are overshadowed only by his notorious reputation. Rachel's traditional values and quiet, responsible character are the complete opposite of what attracts Jake to a woman. When their forbidden attraction turns to love, what will happen at the end of the trail?
©2012 Peggy L Henderson (P)2013 Peggy L Henderson


Review:
Jake Owens broke free of his mundane life on his parents’ Montana ranch to join a slick woman and the fast life in Los Angeles. The woman and her friends are the wrong people and set Jake up to be accused of murder. A strange man visits him in prison and offers him a second chance. The charges will be dropped against Jake if he agrees to scout for a wagon train traveling over the plains to Oregon. Jake is alarmed when he awakens in 1841 to begin his assignment which includes watching over Rachel Parker specifically.

Rachel is a young, beautiful woman devoted to her family. A tragedy has her traveling west with Tom, her drunken husband, and three young boys. When Tom stays drunk and fails to help with the trail duties, Jake steps in to help. Rachel is a woman of quiet, traditional morals who finds herself uncharacteristically attracted to the devilishly handsome, but rough, brash and supposedly womanizing, scout.

Jake tries to control his feelings for Rachel but he uncovers a secret that makes it even harder to stay away. Their relationship becomes more difficult as the people on the wagon train face the arduous dangers of the trail.

The adventure and danger of the wagon train is the backdrop for the strong love story. I really enjoyed the history as well as the growing attraction and sensual edge to the relationship. There is heartbreak on the trail and at the end of the trail that had my heart clinching. Is there any way that Rachel can “come back” to Jake?

This is the second story I read by Ms. Henderson and I enjoy her style. (See review of Audible Book Review: A Yellowstone Christmas: Yellowstone Romance Series by Peggy L. Henderson.) It is a nice break from some of the darker books I have been reading/listening to. I recommend this to readers who enjoy historical western and strong love elements.

Audio Notes: I was at first surprised that a male was narrating this. However since the story is told primarily from Jake’s situation this worked out well. Cody Roberts portrayed Jake in a strong, sexy voice and managed a soft, gentle voice for Rachel. He gives appropriate voices to other characters and does a good job with the entire narration program. I enjoyed the easy listening and recommend the audio for those who like to listen to their ‘read’.

This is from my Audible Library (2015) and part of my Audio Challenge.
Posted by Martha Eskuchen at 5:47 PM