I had several mornings of driving last week so I got to listen to books again. I finished five books and am nearly done a sixth. I posted three reviews, one with Giveaway, and a Giveaway Hop.  I also posted the weekly Mailbox Monday meme, Friday Pick Giveaway, Saturday Snapshot, Sharing Beyond Books Comment Giveaway and Sunday Words.

I visited a handful of Monday posts early in the week and Saturday Snapshot posts at the end of the week.
Thanks as always to all the nice people who visit me.

The Wolf of Tebron
by C. S. Lakin
Very entertaining.
I didn't get the review posted so it will go up this week.
Click on title for full Book Description

Magnificent Devices, a steampunk adventure novel (Magnificent Devices)
by Shelley Adina
I inadvertently read a book midseries but I will go back to the beginning - Loved it! I am holding the review 'till I finish Book 1.
Book Description
Publication Date: October 4, 2012
An air voyage to remember turns into a disaster no one may survive.
With her orphaned charges, Lady Claire Trevelyan joins the Earl of Dunsmuir’s family on an airship voyage to the Americas. If she can stay out of Lord James Selwyn’s way until her eighteenth birthday, she will be of age and cannot be forced into marriage. What she doesn’t know is that Lord James is in the Americas, too, with Andrew Malvern closing in on him—and the wonderful device he stole. But when a storm cripples the airship and air pirates swoop in like carrion birds, Claire and the children must live by their wits to make their way across a harsh landscape. Will Andrew ever see her again and right the wrong he believes he has done? Will Lord James succeed in his monumental thievery? And how exactly does Rosie the chicken evade the soup pot?
Tighten your goggles, pull on your gloves, and prepare yourself for stratagems and strangeness in the third book in the series, Magnificent Devices!

The New World (FREE short story)
by Patrick Ness
I picked this up from my TBR
as Just for Fun read this month.
It is a quick Sci Fi that introduces the series.
Mother, pilot, father, engineer, and 13 year old Viola, as navigator, environmentalist and survival assistant, are bringing in their scout space ship.  They are first to see and land on the planet that is to be the new home for their society, all whom have all been raised on ships. The parents are hopeful and try to encourage rebellious and resentful Viola.
The writing is easy reading with a plot that sets up the opportunity for adventure in the series which I am pulled into adding on my TBR lists.

Book Description
Publication Date: September 27, 2010
In this dramatic short story -- a prequel to the award-winning Chaos Walking Trilogy -- author Patrick Ness gives us the story of Viola's journey to the New World. Whether you're new to Chaos Walking or an established fan, this prequel serves as a fascinating introduction to the series that Publishers Weekly called "one of the most important works of young adult science fiction in recent years."

Ten Reasons to Stay
by Sabrina Jeffries
This is satisfying for a quick romance.
I picked this up at NetGalley and will post a review this week.
Book Description
Publication Date: May 6, 2013
A delightful eNovella from New York Times bestselling author Sabrina Jeffries about a young woman who learns that you can’t learn about love from a textbook.
In “Ten Reasons to Stay,” previously published in the anthology The School for Heiresses, lessons go far beyond etiquette and needlepoint. Eliza Crenshawe’s lesson is to look before she leaps. But when she discovers that her new guardian plans to marry her off without so much as a Season, she forgets all that. She flees—on a horse she unwittingly steals (oops!)—from Colin Hunt, a newly minted earl who wants nothing more than for her to go home…or stay forever. 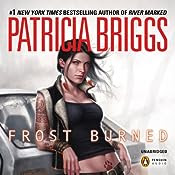 Frost Burned: Mercy Thompson Book 7
Author: Patricia Briggs
Another great Mercy Thompson Story
- lots of action.
Read for my own pleasure and
I'll post a review this week.
Publisher's Summary
Mercy Thompson returns in the seventh novel in the number-one New York Times best-selling series.
Mercy Thompson's life has undergone a seismic change. Becoming the mate of Adam Hauptman - the charismatic Alpha of the local werewolf pack - has made her a stepmother to his daughter, Jesse, a relationship that brings moments of blissful normalcy to Mercy's life. But on the edges of humanity, what passes for a minor mishap on an ordinary day can turn into so much more....
After an accident in bumper-to-bumper traffic, Mercy and Jesse can't reach Adam - or anyone else in the pack for that matter. They've all been abducted.
Through their mating bond, all Mercy knows is that Adam is angry and in pain. With the werewolves fighting a political battle to gain acceptance from the public, Mercy fears Adam's disappearance may be related - and that he and the pack are in serious danger. Outclassed and on her own, Mercy may be forced to seek assistance from any ally she can get, no matter how unlikely.
©2013 Patricia Briggs (P)2013 Penguin Audiobooks


Line Edits/Releases:
Working on releases for May, eBook and Print.

Cowboy Take Me Away
by Jane Graves
This is a fun romance. I have a day to finish and then will post with ARC Giveaway.
Reviewing for Forever, Hachette.
Book Description
Release date: April 30, 2013 | Series: Rainbow Valley
Click on title for full Book Description

Lady of Devices, a steampunk adventure novel (Magnificent Devices)
by Shelley Adina
This week I will read the 1st book in the series since I read book three out of order. :-).
Book Description
Publication Date: May 29, 2011
Book One of the Magnificent Devices series, a novel of 54,000 words.

London, 1889. Victoria is Queen. Charles Darwin’s son is Prime Minister. And steam is the power that runs the world.

At 17, Claire Trevelyan, daughter of Viscount St. Ives, was expected to do nothing more than pour an elegant cup of tea, sew a fine seam, and catch a rich husband. Unfortunately, Claire’s talents lie not in the ballroom, but in the chemistry lab, where things have a regrettable habit of blowing up. When her father gambles the estate on the combustion engine and loses, Claire finds herself down and out on the mean streets of London. But being a young woman of resources and intellect, she turns fortune on its head. It’s not long before a new leader rises in the underworld, known only as the Lady of Devices.

When she meets Andrew Malvern, a member of the Royal Society of Engineers, she realizes her talents may encompass more than the invention of explosive devices. They may help her realize her dreams and his . . . if they can both stay alive long enough to see that sometimes the closest friendships can trigger the greatest betrayals . . .

Jack Absolute
by C.C. Humphreys
I have just started this and like the writing.
My review, for Sourcebooks, is to post on May 3 as part of a tour.
Book Description
Release date: May 7, 2013
Introducing the unforgettable...Jack Absolute.
The year is 1777. As the war for American independence rages across the sea, London is swept off its feet by Jack Absolute, the dashing rogue in Richard Sheridan's comedy The Rivals. That is, until the real Jack Absolute, former captain of the 16th Light Dragoons, returns after years abroad to discover this slander of his reputation.

Before he can even protest, he is embroiled in a duel over an alluring actress of questionable repute, and his only escape is the one he most dreads: to be pressed again into the King's service—this time, as a spy for the British in the Revolutionary War.
From the streets of London to the bloody battlefields of Saratoga, from the forest fights to the Hudson to the seedy corners of wintry Philadelphia, Jack Absolute marks the exhilarating beginning of an epic historical series and a character you won't soon forget.
"The finest series of historical novels since Patrick O'Brian."—Good Book Guide UK
"An absolute delight! Swashbuckling adventure, eighteenth-century wit, hugely entertaining plots, and one of the most appealing military gentleman every to wear a sword."—Diana Gabaldon, author of the Outlander and the Lord John Grey series.
"If you like the American Revolution seen from a completely unexpected point of view, plus romance laced with violence and imminent death, this is your kind of book."—Thomas Fleming, author of Washington's Secret War: The Hidden History of Valley Forge 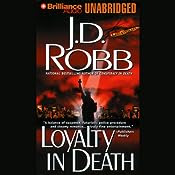 Publisher's Summary
Eve Dallas returns to face her most ingenious foe - a "secret admirer" who taunts her with letters...and kills without mercy.
An unknown bomber is stalking New York City. He is sending Eve Dallas taunting letters promising to wreak mass terror and destruction among the "corrupt masses". And when his cruel web of deceit and destruction threatens those she cares for most, Eve fights back. It's her city...it's her job...and it's hitting too close to home. Now, in a race against a ticking clock, Eve must make the pieces fit - before the city falls.
Crack another case with Eve Dallas.
©2007 J. D. Robb; (P)2007 Brilliance Audio


I continue to listen to The Listener's Bible NIV read by Max McLean. [Reading and listening on MP3.] I am studying with the Tyndall One Year Bible this year, hoping to read daily along with my DH.

Line Edits: Several more releases being prepared for the next few weeks. I am still doing more Smashword conversions in between print formatting.

I have completed fifteen books for April with probably two more to be finished by Wednesday. I have several reviews to post though. It was a good, comfortable month of reading.

I have fewer books lined up for May, so I can pick some more that I want. Eight of these are print which means two print books a week that may be harder... I will probably get one or two of them on Kindle for quicker reading (listening).

May Scheduled:
May 3: Jack Absolute by C.C. Humphreys
Early May: Kindle Fire Giveaway

Sourcebooks: (Both release 5/7)
Heart of Iron by Bec McMaster
Undone (The Amoveo Legend) by Sara Humphrey