Audio Book Review: Did You Miss Me? By Karen Rose

I really liked this strong, intense thriller with a warm romance.
Did You Miss Me [Audiobook, Unabridged]
Karen Rose (Author),
Marguerite Gavin (Reader) 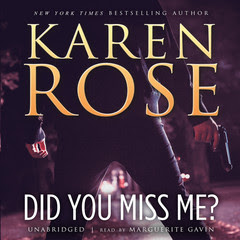 Book Description
Publication Date: February 5, 2013
New York Times bestselling author Karen Rose is back with her fourteenth pulse-pounding thriller.
Best be nimble, best be quick, I'm right here and you're my pick . . .
The last thing Ford Elkhart remembers is walking his girlfriend back to her car. Now he's lying tied and gagged on a cold, dark floor, with only one chance to escape before he ends up like the bones surrounding him.
Assistant State's Attorney Daphne Montgomery is devastated by her son's disappearance and is immediately convinced that his kidnapping is connected to the white supremacist she's just had jailed for murder. FBI Special Agent Joseph Carter isn't so sure -- especially when he learns that Ford's girlfriend is also missing. Is Ford's abduction payback for Daphne's courtroom victory, or is he a pawn in an even more dangerous game?


Review:
State Attorney Daphne Montgomery is involved in an intense trial bringing a young, white supremacist to justice. At completion of the trial other family members attack. That is scare enough but what really has Daphne trembling is the kidnapping of her teenage son, Ford. At first it is thought that the supremacist group is involved, but the listener learns more about the killer’s motives while bit by bit the clues reveal his personal vendetta against Daphne. She will have to acknowledge a horrifying kidnapping from her own childhood and uncover a terrible betrayal before she is released from this nightmare.

This is a story that pulled me in quickly with a murder and kidnappings. It leads the reader through Ford’s struggle to escape and survive, and then along a dark, chilling race by Daphne and investigators to save other innocent girls.  Woven within the danger is a strong love story. FBI Special Agent, Joseph Carter, fights his own memories as he fights to protect Daphne from a killer and from the pain of losing her son.

There was some unnecessary repetition and some drawn out sections that slowed the pacing a time or two. I was not pleased that Daphne, a strong career professional, became a whining mess when her son was kidnapped. But those issues didn’t stop my enjoyment of the twisting mystery and dark suspense. I also enjoyed the interaction with characters from earlier stories and I was impressed that Ms. Rose incorporated a battle with cancer as part of Daphne's history.

I have only read a couple of Ms. Rose’s works but I really appreciate her ability to develop a good, twisting mystery and twine in a believable and warm romance. ( I hope Clay gets a story for himself.) I recommend this book and this author to readers who love a good romantic suspense and those who love a solid, dark thriller.

Audio Notes: The narrator for this is Marguerite Gavin who is familiar to me from another series I really like. Although I recognized her voice when I first started listening, I was quickly caught up in the story after that first recognition. Ms. Gavin does a good job of distinguishing characters by their voices and conveying their many emotions. She even managed the ugly whininess of Daphne - a character flaw I attribute to the author as it was repeated several times. The truly creepy rendition of “I’m baa-aack. Did you miss me?” adds to the suspense. There were a couple of bad editing breaks that were just a shame and momentarily startled me but for the most part the audio added to the story for me. This would no doubt be a good suspense read but it was wonderful to listen to.


I received this Audio download for review from Blackstone Audio, Inc. through Audiobook Jukebox.
This story is set in West Virgina for my 2013 Where Are You Reading Challenge.
Posted by Martha Eskuchen at 5:00 AM