I really like this fantasy adventure with animal shifters and a battle of good and evil. 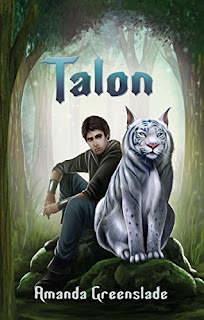 With a newly awakened icetiger for his companion, Talon is finally learning the magic of the Kriite people, including telepathy and shape-changing. After his home town Jaria is attacked by Zeikas he embarks on a mission to seek help.
Before Talon even understands the power within him, there are demon summoners after him. He is horrified to learn that the Zeika leader plans to use Talon’s body and mind to further his ambition for power. Bal Harar is on a god-given mission to enslave or kill all Kriites.
Talon represents both the greatest threat and the greatest opportunity to the Zeikas—his actions and faith will make all the difference between the two.


Review:
Talon is on the cusp of manhood when he finally meets his ‘Rada-kin”, the animal companion which allows his telepathy and shifter skills to emerge. Talon’s special animal is a powerful icetiger which brings him quick respect from most of his clan. Talon’s people are Kriites who believe in a loving God (Krii) who takes the shape of a wolf and who helps the people through ‘magic’ of nature and spirit. Although the Kriites want to live in peace, they are being enslaved and killed by the cruel Zeikas who consider those who believe in any God but theirs (Zei) as inferior infidels.

The Zeikas have powerful magic which includes demon summoning but they do not have the strength of the telepathy that the Kriites have. A ruthless Zeika leader, Bar Harrar, believes he can take over Talon’s magical skills – or he will eliminate him if his plan to control him doesn’t work.

Talon’s town is attacked as the Zeikas seek to capture him. The town elders send Talon on a quest to discover the full extent of his powers hoping he can return as a strong leader to help them. They agree that a visiting ambassador, Sarlice, who has more experience, can serve as Talon’s guide to first travel together to seek the King’s assistance and protection against the Zeikas for their respective clans. The two young adults set off with their animal companions to make the dangerous journey with enemy Zeikas abounding and hope of allies unsure.

The characters are nicely developed with relatable emotions. I enjoyed the fun interaction between Talon and his icetiger as they get to know each other and their world perspectives. The world building is creative and workable and there is plenty of fighting action to keep things interesting. It was clear early in the story that this has allegorical elements of Christian faith, love and peace having to face a world full of wicked, evil, power seeking enemies. I like the good versus evil battle aspects as well as the telepathic and animal shifter magic so it is an engaging package for me.

The book is a good start to a series and ends with the companions being chased into the next mysterious land for Talon’s quest. I will be looking to pick up the next book. This is appropriate for YA reading but I recommend this to all readers who enjoy fantasy with sword play and shape shifting.


Source: NetGalley 2017. This qualifies for 2018TBR, NetGalley and Alphabet Challenges.
Posted by Martha Eskuchen at 7:30 AM