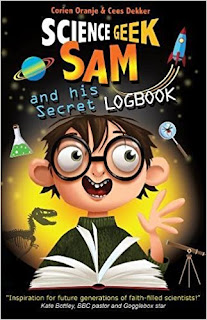 "I'm afraid you're at the top end of the healthy weight range," said the doctor. This is doctor's speak for "you are FAT"! "Do you know how much I'd weigh if I was on Pluto?" "No idea," replied the doctor. "Only 2.3 kilograms. Practically nothing!" Meet Sam, science geek extraordinaire, and have an exclusive peek at his top secret logbook. When a meteorite crashes into Sam’s school bike shed, his class have a LOT of questions about space, the universe, and life on earth. But can they believe in God AND the Big Bang? They make some cool discoveries that show them that, surprisingly, the answer is a clear yes. A fact-filled and thought-provoking story that will make you chuckle.


Review:
Sam is a ten or eleven year old (based on highest grade in primary school) who loves science. His Uncle Jack is a science professor. When a meteorite crashes on the bike shed at Sam’s school, Uncle Jack is one of the experts called in to investigate. Many questions arise from the meteorite crash and Sam’s teacher, Mr. Nolan, decides to set up a “People Library” to bring in people with expertise to share knowledge and answer questions for the students.

Uncle Jack is one of the speakers who comes in to explain the scientific aspects of the meteorite, planets and the universe. In the process he describes the science of the Big Bang. However, Sam’s school is a Christian school and some of the parents are alarmed that the students are being taught science facts that might conflict with the beliefs they have been taught. The students hear from other people about God’s Creation but there are still conflicting arguments.

Mr. Nolan arranges a week-long camping trip for the class where the students can visit a museum, a planetarium and get some hands-on experience as well as researching their questions.
Not everyone is thrilled with the idea of “camping out”. When they go, there are conflicts among the students, but they work through issues and end up having a great week.

The story is told in a very fun fashion through Sam’s journaling, narrating and email exchanges, mostly with Uncle Jack. There are fun interactions and incidents with the students that add a personal element of appropriate aged fun.

Sam is a curious ‘science geek’ and the book is packed with tidbits of information about things such as meteors, stars, fossils and even DNA. Throughout the book there are weblinks and scan codes to explore the facts and theories that are discussed. I thought this was very clever and hope young people would take advantage to see the additional resources.

The authors do an engaging job of sharing scientific arguments and Christian foundations of creation. The authors make a presentation that allows a merger of Biblical and scientific elements, allowing for God to have created the world over a long period of time. The overall package encourages young people to be open minded in their studies of creation and science.

The book combines the scientific knowledge and evangelist faith of Cees Dekker with the fun writing skills of child author Corien Oranje. The illustrations by Perta van Rijssen are basic, fun and fitting to add to the story. I don’t agree totally with the science that is presented but I thought the method of sharing the arguments was fun and thought provoking.


Source: NetGalley (Jan 2018). This qualifies for NetGalley and 2018 Alphabet Challenges.
Posted by Martha Eskuchen at 8:13 PM