Audible Book Review: Under a Tell-Tale Sky by R.E. McDermott

This is a solid, entertaining addition to my post-apocalyptic reading/listening binge.
Under a Tell-Tale Sky
Disruption, Book 1
By: R.E. McDermott
Narrated by: Kevin Pierce 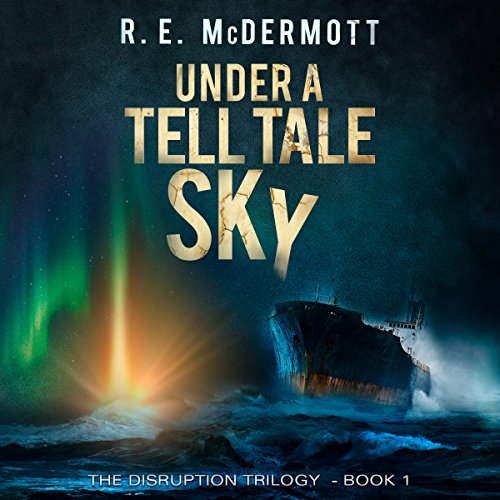 Publisher's Summary
When a massive solar flare fries the electrical grid, Captain Jordan Hughes' problems are just starting. Stranded far from home with a now-priceless cargo of fuel and a restless crew, Hughes weighs his options as violence worsens ashore and the world crumbles around the secure little world of his ship, the Pecos Trader.
"Wait and see", is not an option. Hughes has to get his ship and crew home, but FEMA arrives with other plans.
Resisting the demands of an increasingly corrupt and self-serving federal bureaucracy, Hughes leads a ragtag band of sailors, preppers, and dissident military personnel on an incredible voyage to reunite them all with home and family - only to find their real journey is just beginning.
©2015 Robert E. McDermott (P)2016 Robert E. McDermott


Review:
A solar flare causes an EMP event that takes down the power grid across America and, presumably, the world. The story begins with the introduction of the crew of a cargo ship in North Carolina. After their station is attacked, some Coastguard members join with the ship with the goal of providing support in numbers. Crew members divide as the Captain decides to return to his home base in Texas. Several choose to travel north to their homes by other means. Some travel with more caution than others but they all face danger with the ship crew heading for more trouble than they can imagine.

Meanwhile the highest leaders in the land decide that there is no choice but to abandon most of the people to their own efforts. They make plans to get the power grid back up for their own benefit and control. They turn a blind eye to corruption, thieving and ravaging by tyrannical FEMA authorities as long as they get a piece of the spoils.

It doesn't take long for criminal and corrupt politicians to take advantage of the crisis. Will good people be able to join together to battle back the chaos and evil as they try to survive, much less think of recovering?

McDermott does a good job of setting up plausible scenarios. He develops a handful of strong characters (mostly men although there are a few brave women too) and provides family situations that provide motive to keep the characters moving towards home or safety. The top villains are also developed enough to be despicable and scary. I liked how each chapter is identified by location and date relative to the event. This helped me as a listener to keep track of where the action was and who was involved. Admittedly, the changing scenes allowed for temporary cliff hangers which kept me listening till it came back to the tense scenes so I could learn what happened.

There is plenty of action to make this a solid, entertaining post-apocalyptic story. I recommend this to those who like the genre. I will be getting book two to continue with the journey and battle for survival.

Audio Notes: Kevin Pierce is a go-to narrator for sci fi. He presents distinct voices, suitable energy and emotion and steady pacing. I am always glad to listen as his narration adds to the reading experience.


Source: July 2016 Audible Selection. This qualifies for 2018TBR and 2018 Audiobook Challenges.
Posted by Martha Eskuchen at 5:30 AM