This is a charming romance with a great dog included.

One Man's Opus
A Survival and Preparedness Story
By: Boyd Craven III
Narrated by: Kevin Pierce 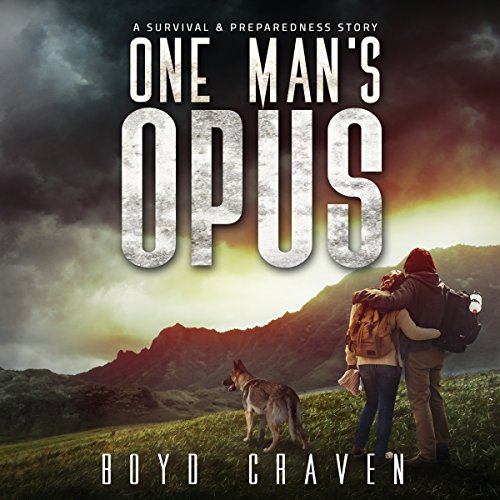 
Publisher's Summary
Man's best friend.
Rick is like many Americans. He's concerned with what he sees on the news, and how the country seems to be ready to tear itself apart. His biggest concern has been civil unrest. Already an avid camper, he sets out to secure his future, and career, by finding his own Eden.
Tina is a small-business owner and knows what she wants in life. She and her furry companion find themselves at gunpoint when Rick walks back into her world and forever changes the dynamic between them.
One dog, who's been the savior, protector, and companion...Opus. The owner of two humans that mostly understand him. Mostly.
When the police walk into an ambush, a series of events forces the couple to bug out. The problem with having to leave for a small town, at a remote location, is it really isn't a secret. Small towns bring their own problems with crime, and power plays. Everybody knows everybody, and the gossip mill runs as fast as lightning.
Will the trio be as prepared as they need to be?
©2017 Boyd Craven III (P)2017 Boyd Craven III


Review:
Rick is a serious introvert and sort of a geek author. He thought he would write a different genre but, on a dare, he started writing paranormal romance which provides a decent living. A friend offers him an old RV and Rick re-meets Tina when he goes to ask to park the unit at her storage facility. In an unexpected situation he is surprised to meet her guard dog, Opus.

Rick goes camping and begins to set up a campsite/bug out place. He thinks he may need to be more prepared for rough times. Rick, with Tina visiting, spends more time at the RV especially as unrest and riots spread in the city. Most of the campsite neighbors are friendly but one man and his unpleasant friends object and look to cause trouble.

The relationship between Rick and Tina develops slowly, always with Opus making his presence known. Rick and Tina are very relatable, real to life characters and Opus is a gem. This is a charming romance story which moves along at a nice pace with the decisions of life and impact of friends added in.

I have read and enjoyed a couple of post-apocalyptic tales by Mr. Craven. This story is not truly post-apocalyptic but rather a preparedness story as stated. I was pleased to find this engaging even though it is not full of tension and action. It is not a steamy romance either; just a nice, warm love story. I recommend this to readers who enjoy a natural life, warm romance and might like the touch of prepper elements.

Audio Notes: Kevin Pierce does a solid job of narrating. He creates voices for characters and provides appropriate emotion while being a very easy listen. I enjoy his portrayal which added to my enjoyment of the book.